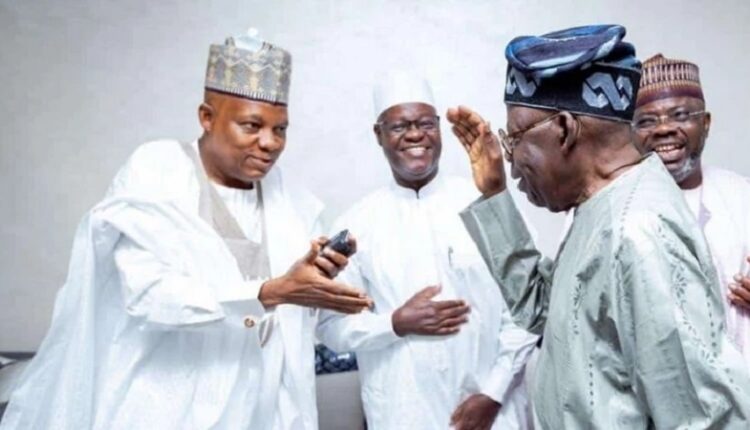 Share
The Vice President candidate mate of the All Progressives Congress (APC), Kassim Shettima, has denied linking the party’s presidential flagbearer, Bola Tinubu, and late head of State, Sani Abacha, to having same quality on hospitality in the country.
Shettima said that rather, he linked both men together for possessing same fearful quality and solution to resolve security challenges that had crippled commercial activities across the country
He made the clarification on Friday in a statement released through his official social media handle, claiming that there was no where he compared Tinubu and Abacha which had now continued to generate reactions from Nigerians
The Borno State former governor noted that his speech yesterday at an event organised by the Yoruba Tennis court was explicit clear and explained all that he meant during the event.
He noted that all his argument were that the country present status required that whoever would be leading the country next year must be someone that have numerous leadership qualities and could navigate easily.
According to the statement, “The obsession with distorting one’s views to settle partisan scores brings to mind a certain WBC Commentary. “The trouble with deliberate bias,” it says, “is that it cannot be erased by sound education”. The video of my speech in Lagos is out there for those sincerely curious.
“I never attributed hospitality to Abacha in my speech. I did a rundown of our past Presidents and played up “the taciturnity and a dose of ruthlessness of a Sani Abacha” to show we need strongmen to deal with the nonstate actors who’ve turned Nigeria into a vast killing-field.
“I was quick to tease the audience, appreciating the humour hovering around the hall, with the familiar jibe that nice men don’t make good leaders. By nice men I meant those who get easily manipulated and pressured to divert state resources to appeal to private expectations”.

Anthony Joshua VS Fury: The mistakes