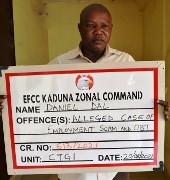 The Economic and Financial Crimes Commission, EFCC, has arraigned a petroleum marketer, Daniel Dal before Justice Darius Khobo of the State High Court, Kaduna on one count charge bordering on 1.5 million employment scam.

Daniel was said to have allegedly obtained the sum of 1.5 Million from his victim to secure a job for him with the Universal Basic Education Commission, which he failed to fulfill and attempts by the victim to get a refund also failed.

Justice Khobo was said to have granted bail to the defendant in the sum of 1 million and one surety in like sum, who must be resident in Kaduna State and have a landed property with a Certificate of Occupancy.

The court adjourned Daniel’s case to February 22, 2022 for commencement of trial.

Before the adjournment, the defendant had pleaded not guilty to the charge, prompting the prosecuting counsel, P.C Onyeneho, to ask the court for a date for trial to commence. However, the defence counsel, T.A Bello, had urged the court to admit his client to bail.

The charge reads: “that you, Daniel Dal sometimes between May 2019 and August 2020 within the jurisdiction of this Honourable Court with intent to defraud, obtained the sum of N 1, 470,000.00 ( One Million, Four Hundred and Seventy Thousand Naira) only from Adamu Sule under a pretence to secure a job for him with the Universal Basic Education Commission ( UBEC) which you knew to be false and you thereby committed an offence contrary to Section 1 (1) of the Advance Fee Fraud and Other Fraud Related Offence Act, 2006 and punishable under Section 1 (1) of the same Act”.