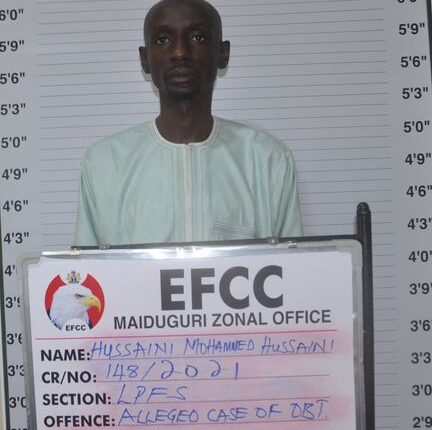 The defendant was said to have allegedly swindled the nominal complainant over sale of two plots of land which he claimed he had the owners’ instruction to sell but investigation had revealed that he was neither a custodian of the land nor acquainted with the owner.

During the court procession Yesterday,  Justice Kumaliya read the charge to the defendant in the language that he could understand  and he had pleaded ‘not guilty’ .

The charge reads: ‘‘That you, Hussaini M. Hussaini sometime in September, 2021 at Maiduguri, Borno State within the jurisdiction of this Honourable Court fraudulently induced Suleiman Abiodun by deceiving him to deliver the total sum of Four Million, Two Hundred Thousand Naira (N4, 200, 000.00), being money allegedly for the payment of two plots of land measuring 200ft by 100ft lying and situated at 44G Damboa Road, between Federal Road Safety Office and Federal Metro Radio Station, via Bank transfer from his Zenith Bank account number 2083694059 to account number 2119265725 domiciled at UBA, with account name; Alhassan Sanusi, and thereby committed an offence contrary to Section 320 of Penal Code Law Cap 102, Laws of Borno State 1994 and punishable under Section 322 of the same Law.’’

The judge was said to have adjourned the matter till January 17, 2022 for continuation of trial, adding that the defendant would be remanded in the Correctional Facility.

Before the adjournment, the prosecution counsel, Fatsuma Mohammed was said to have asked for a trial date, adding that the court should  remand the defendant in the Correctional Centre.

As learnt, the attempt by counsel to the defendant, Ernest Bayo to move oral bail application for his client was said to have been turned down as Justice Kumaliya insisted that bail application must be filed and served on all parties including the court before his prayer could be heard.