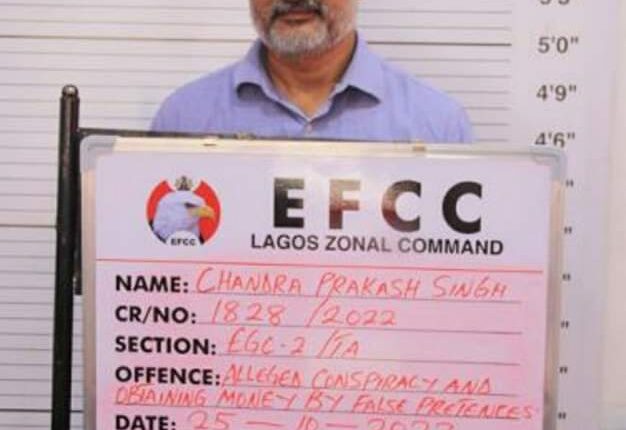 The Economic and Financial Crimes Commission (EFCC) has dragged an Indian national, Chandra Singh, before a High Court sitting in Ikeja, Lagos State capital, over the alleged retention of stolen property and bribery worth over N816 million.

Also, the anti-graft agency has arraigned Resorts Express Concept Nigeria, one of the over thirty companies linked with $9.6 billion Process and Industrial Development (P&ID), on an eight count-charge bordering on money laundering.

The agency against corruption disclosed this development through statements released on Thursday on its official website.

On the Indian national, EFCC noted that Singh was brought before Justice I.O. Ijelu on a 19-count charge bordering on alleged retention of stolen property and bribery, actions that were punishable under the country’s law.

On the P&ID case, the anti-corruption agency sorts the attention of Justice D.U. Okorowo of the Federal High Court in Federal Capital Territory (FCT) Abuja, to grant its requests after linking the firm to the fraud.

The company was docked before the court alongside the directors, Giovanna Beccarelli and Corrado Fantoli, both of who were currently at large after discovering that the anti-graft agency’s investigations linked them to the case.

After the “Not guilty” plea was entered by the court, prosecution counsel, Bala Sanga prayed to the court for a trial date, adding that the prosecution has two witnesses.

Also, the EFCC counsel asked that the court issue a warrant for the arrest of Corrado Fantoli, a director of the company, to enable him to face trial.

“The request is hereby granted and adjourned till December 2, 2022, for commencement of trial”, he added.