The Edo State Government has revoked 18 hectares of land owned by the candidate of All Progressives Congress (APC) during the last gubernatorial election, Osagie Ize-Iyamu, in Amagba village in Benin City, the state capital, to build public facilities.

As gathered, the government alleged that the land Ize-Iyamu was laying claim to belong to the state government, and was meant for government projects but was converted to personal use by the APC candidate while serving under the previous administration.

The revocation was contained in a letter titled: ‘Revocation of statutory right of occupancy granted to Barr. Osagie Ize-Iyamu on all that portion of land measuring 18 hectares at Amagba village’, and was signed by Chief Registrar of titles and documents, by Nora Ohiwerei

In the letter dated July 22nd, 2021 and obtained on Saturday, the state government argued that the letter was a follow-up to the publication earlier made on the land and that Ize-Iyamu should vacate the land. 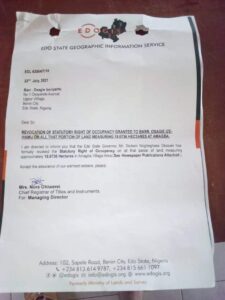 Obaseki had earlier stated that in the previous notice published that he drew his powers to take back the land from his opponent during the last gubernatorial poll from the Land Use Act of 1978.

The revocation notice issued by Godwin Obaseki-led’s administration has reinforced the divide among Edo residents along party lines, with supporters of the APC candidate describing the governor’s action as politically motivated and a renewal of the political battle to annihilate Ize-Iyamu.