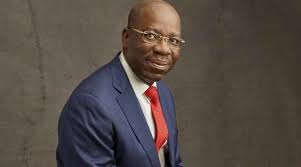 The Edo State Governor, Godwin Obaseki, has congratulated the Oba of Benin, Omo N’Oba N’Edo Uku Akpolokpolo, Oba Ewuare II, as well as the Royal Palace of the Benin Kingdom, on the birth of a new son and prince to the family.

Obaseki, who expressed his elation at the birth of the new prince through a statement, stated that the addition to the royal family had expanded the splendor of the Benin monarchy.

He said that the people of Edo State, as well as he and his immediate family members, rejoiced with the King on the occasion of the birth of a new prince into the Kingdom.

“It is with a delighted heart that I congratulate His Royal Majesty, Omo N’Oba N’Edo Uku Akpolokpolo, Oba Ewuare II, the Oba of Benin, and the Royal Palace of the Benin Kingdom on the new addition to the Benin Royal family,”

“His arrival has expanded the splendor of the royal palace of the Benin Kingdom, and we pray that the greatness of the kingdom of his royal majesty would continue to grow without bounds in the fruitful years ahead.”

Obaseki’s message came on the heels of the announcement by the Benin Traditional Council (BTC) on behalf of the monarch, which revealed that a new prince had been born by Queen Iyayota.

The Iyase of Benin, Sam Igbe, confirmed the birth of the child to newsmen yesterday, saying that the Queen and the infant prince were in excellent health.