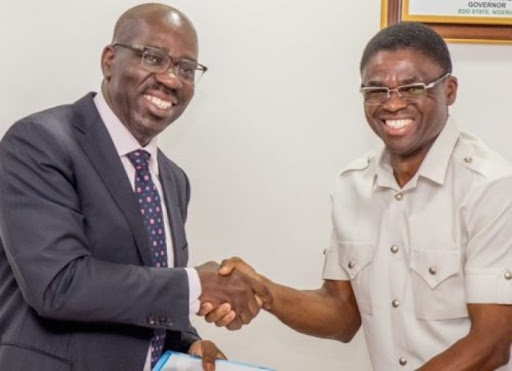 In an apparent show of solidarity, Edo State Deputy Governor, Philip Shaibu, has officially resigned from the ruling All Progressive Congress (APC) following the footsteps of his superior, Governor Godwin Obaseki.

This is coming as Shaibu also throws his weight behind the decision of his superior who earlier dumped the ruling APC in his bid to seek reelection, saying the governor’s critics were only trying to score cheap political points. He also advanced reasons why Obaseki deserved reelection for the second term of four years saying the developmental stride embarked upon by the administration must not be left at crossroads.

Shaibu’s resignation came hours after the governor resigned from APC following his disqualification from contesting the forthcoming gubernatorial elections by his former party’s screening committee.

“It is with great pain that I am leaving the All Progressive Congress (APC), I helped and laboured to build as a result of the reckless and absolute lawlessness of Comrade Adams Oshiomhole – the suspended National Chairman of APC.

“His undemocratic and dictatorial tendencies exhibited at all times have become intolerable. The APC has been hijacked for some Personal and selfish interests of an individual, Comrade Adams Oshiomhole. The height of it all was his highhandedness and intolerant conduct at the APC screening exercise. I believe that the President of our great country will be very sad at this development but I am left with no other choice than to take my political destiny in my hands. Hence, my resignation from the party,” the letter read.

Rallying support for his superior’s decision, the deputy governor noted that those against the reelection of Obaseki were those who had failed the state and its people when they held sway in government positions.

In a statement released to newsmen on Tuesday through his Special Assistant on Media, Benjamin Atu said, Shaibu added that Obaseki’s traducers were those who failed woefully and mismanaged the state’s resources.

“The most vocal critics of the incumbent administration are people that were colossal failures during their era in government, who in actuality owe the people of Edo State and apology for their mismanagement of the State resources.

“Their daily criticism against the government is geared towards scoring a cheap political point in their race for political survival.”

“The background of those attacking Obaseki makes their criticism annoying since all of them have failed during their stint with managing the affairs of the State in previous years.

“Obaseki’s administration has recorded numerous developmental strides and the people have also expressed satisfaction over the developmental efforts made by the current administration. We are happy that we have kept to our campaign promises irrespective of the ongoing sponsor drama by some political elements,” the statement read.

On why Obaseki deserves the second term, Shaibu stressed that the governor needed to consolidate on his achievements and also curtail the extravagance and overindulgence in government.

“The volumes of the government programmes and projects that are creating wealth and job opportunities, reviving collapsed business enterprises stimulating agriculture and local food production are reasons why Governor Godwin Obaseki is in the race in order to consolidate on these first-term achievements in office, the statement added.