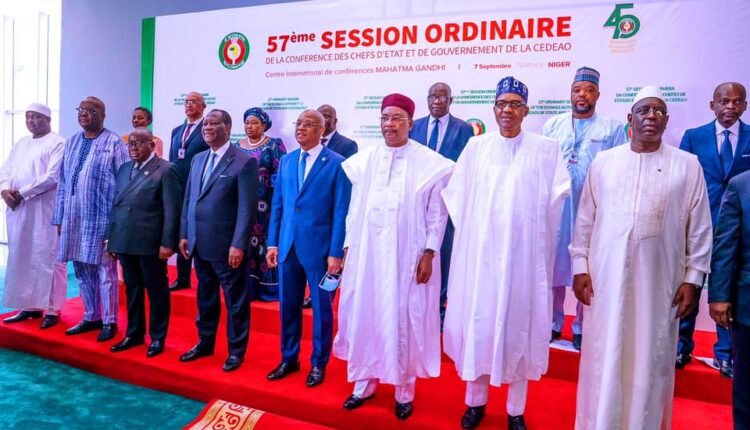 The Economic Community of West African States (ECOWAS) has elected the President of Ghana, Prof. Nana Akufo-Addo, has its new chairman.

He was elected during the 57th ECOWAS Summit which held in Niamey, capital of Niger on Monday, where the West African leaders deliberated on the Special Report on COVID-19 presented by President Buhari who was appointed the ECOWAS Champion on the Fight against COVID-19 during the Extraordinary Virtual Summit of ECOWAS in April.

During the one-day summit, the special report on the ECOWAS single currency programme was presented by Sierra Leone and Chair of the Authority of Heads of State and Government of the West African Monetary Zone (WAMZ), President Julius Maada Bio, and President Alassane Ouattara, who is Chair of the West African Economic Monetary Union (WAEMU/UEMOA).

Also, the President, ECOWAS Commission, Jean-Claude Brou, presented the 2020 Interim Report on activities of the sub-regional body including ECOWAS Vision 2050 to the West African leaders.

As gathered, issues ranging from the rise in incidents of terrorism, insurgency, armed banditry,  piracy, and disruption of the democratic process by the military in Mali was said to have been deliberated upon.

However, The Ghana Ministry of Information confirmed Akufo-Addo’s election through the ministry’s social media page.

“President @NAkufoAddo has just been elected as the new Chairman of the Economic Community of West African States (ECOWAS), at the ongoing 57th ECOWAS Summit, which is being held in Niamey, capital of Niger,” the post read.

#Breaking President @NAkufoAddo has just been elected as the new Chairman of the Economic Community of West African States (ECOWAS), at the ongoing 57th ECOWAS Summit, which is being held in Niamey, capital of Niger pic.twitter.com/TBhFzxoBAW