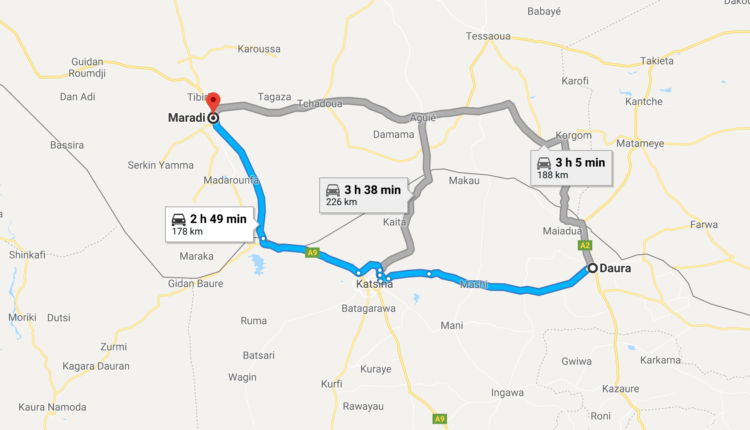 “Thinking on your own terms is a critical part of letting go of your biases, but it takes digging deep and it requires piecing together the thousands of tiny truths to form original and fact-based opinions”-E.B. Johnson.

The Minister of Transportation, Rotimi Amaechi, broke the news about the Federal Executive Council approving $1.96 billion for the construction of Kano-Maradi rail line, the rail will link “Kano, Dutse, Katsina and Maradi in Niger Republic”. The rail line will be connecting the most populous city in Nigeria to Katsina, Jibia, Katsina, Dutse and finally Maradi. Maradi is a “border city” historically attracting merchants from Nigeria and Niger Republic for centuries for active commercial purposes. It is believed to be the most commercially active city in Southern Niger.

This news has inspired political, ethnic and emotional biases veiling all tendencies of independent policy or Intellectual analysis. This write-up will be giving the “tango” a new beat, escaping the prism of politics, ethnicity and cheap emotionalism.

How strategic is railway transportation to West Africa’s Economic Union?

Prior the birth of Economic Community of West African States (ECOWAS), in 1960, the Economic Commission for Africa (ECA) had mapped out revolutionary infrastructural policy which would cut across the Sahara; the Lagos-Mombasa road, Cairo-Cape road etc. The standards were agreed upon coupled with operating laws. Since 2009, ECOWAS has been pushing for interconnecting rail networks between 11 member states out of 15, this is in line with ECOWAS infrastructural mandate to maximize road transport Sector, railway sub-sector and Air Transport sector. The network connecting land locked countries and countries with coastal advantage is very crucial to regional trade.

Is it time for cross-border rail line?

Many have questioned the reasons why the Federal Government of Nigeria will priotize cross-border infrastructures considering the domestic infrastructure deficit in Nigeria, the question remains “why will a broke Government dedicate debt of $1.96 billion on a rail Project linking a city in Niger Republic?”. First, it will be necessary to refresh the minds of my readers about the latest rail projects gaining attention and why that of cross-border is also very strategic. Lagos-Ibadan rail line worth $1.5 billion, Ibadan-Kano rail approved construction worth $5.3 billion, we also have Warri-Itakpe rail line and Port-Harcourt-Maiduguri rail project yet to commence. Beyond emotions, studying the trends of these projects, one will decipher the strategic local rail infrastructures connecting states from North and South and expanding to South of Niger Republic where the commercial city of Maradi lies. In fact, the Ibadan-Kano rail line is more expensive compared to Kano-Maradi rail.

“According to the Minister of Transport, Nigeria is the only country in West Africa without a single window for clearance of goods on the same day of arrival.” A single window is a facility that allows for parties involved in trade and Transport to lodge standardized Information and documents with a single entry for import-export and transit-related regulations. I don’t see any reason why we can’t use this opportunity of “rail revolution” to kill two birds with a stone, that is “encourage inter-state trade in Nigeria and facilitate more regional trade” considering the fact we are the largest economy in West Africa.

Is it economically smart to invest $1.96bn on cross-border with Niger Republic?.

Unfortunately, About 80 per cent of trade between Nigeria and other West African countries is informal, going by estimates from the West African Association for Cross-Border Trade in Agro-Forestry-Pastoral and Fisheries Products (WACTAF). Late Professor Adebayo Adedeji, who was Executive Secretary of UN Economic Commission for Africa(ECA), had opined thus “We [in ECA] undertook a study on what we called “unrecorded trade” in West Africa. We found that the value of unrecorded trade is more than equal that of recorded trade. In other words, if you added the two together, you would have doubled the volume and value of intra-West African trade”.

Interestingly, relying on the above mentioned informed opinions, one can infer that the trade volume between Nigeria-Niger is underestimated and less underrated by Southerners especially considering less experience of historic cross-border trade between Northern Nigeria and Niger.

Furthermore, UNICEF joint report of 2004 gave the best detailed trade reports between Nigeria-Niger especially on food security. The report posited that “Despite a diversification of Niger’s sources of cereal supply since the mid 1990s, Nigeria remains its major supplier in periods of food shortages. Besides the proximity of the areas of production and the relatively cheap price of fuel in Nigeria, reducing transport costs, many other factors relating to the size of its market and its production structure explain the competitiveness of products from Nigeria. In addition, traders from Niger and Northern Nigeria understand each other perfectly, belonging to the Hausa area with 50 million Hausa speakers. They share 1,500km of common border and are often related by family, religious and lineage links” (UNICEF joint mission report on food security and Cross border trade in the Kano-Katsina-Maradi corridor 2004). It must be emphasized that the Kano-Maradi trade corridor is not just significant to Nigeria and Niger but connecting Gulf of guinea, North Africa.

Why Kano-Maradi and not Lagos-Benin Republic?.

More significant questions have been raised on why the choice of border city of Maradi in Niger Republic and not Lagos-Benin Republic cross-border route which is more strategic considering the Industrial advantage of Lagos State. It must be emphasized that both Lagos corridor and Kano corridor are very significant for domestic trade and regional trade, the ongoing Lagos-Badagry 10 lane expressway Kickstarted in 2010 will not only accommodate road infrastructures but rail infrastructures too and the current Lagos State Government had disclosed the resumption of the Project and renewed collaboration with the FGN.

Furthermore, it will be more resourceful to analyse the trade potentials of Niger and Benin Republic to erase unnecessary sentiments. According to Observatory of Economic Complexity (OEC) Product imports (2018) of Niger Republic is $1.15 billion and Niger imports most from these countries; Nigeria($111 million), China ($115M), India ($93.1 million) etc and Niger borders Algeria, Benin, Burkina Faso, Chad, Libya, Mali and Nigeria.

Benin Republic exports mostly to Nigeria ($89.2 million), India ($274 million), Bangladesh ($216 million) and import mostly from China ($1.8billion), India ($422 million), France ($272 million). Keenly studying these figures, one will resolve that Benin Republic has a bigger economy than Niger but Niger is more reliant on Nigeria’s Economy despite massive unrecorded trades. We will infer that we import from Benin Republic and export more to Niger Republic, Lagos and Kano corridors are gaining attention and the two deserves it but these figures prove to an open-minded Intellectual that Niger Republic market is highly underrated and exploiting it through rail is not a bad idea.

In conclusion, For the gains of the African Continental Free Trade Area (AfCFTA) to be realised, the government must address the supply side constraints of lack of infrastructure, the Manufacturers Association of Nigeria (MAN), has said. With the infrastructure deficit of $100 billion as confirmed by Infrastructure Concession Regulatory Commission, there is need for Nigeria to be bullish about infrastructural development and rail infrastructure encouraging local and regional trade cannot be overemphasised either for ECOWAS or AFCTA. Infact, the regional linking infrastructures through rail is the best opportunity for Nigeria to formalize cross-border trade more, digitize data for economic and security reasons and prepare for future economic maximization of West Africa being the largest economy.

Mujib Dada-Qadri is a Nigerian Lawyer and Policy Analyst.