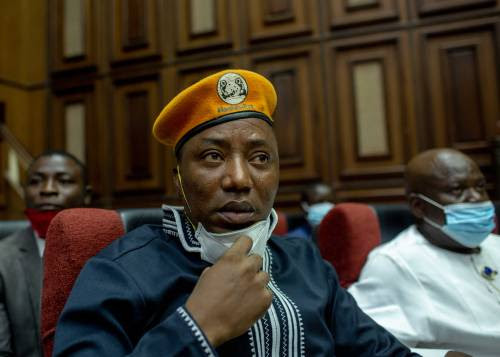 The Federal High Court in Abuja, has ordered the Department of State Services (DSS) to pay the Convener of #RevolutionNow, Omoyele Sowore, the sum of N2 million over the unlawful seizure of his mobile phones in 2019 at the point of his arrest.

Sowore, through his lawyer, Funmi Falana, in a fundamental rights enforcement suit, was said to have alleged that the operatives of the DSS, on Aug. 3, 2019, at a hotel in Lagos, forcefully took away his iPhones and the sum of N10, 000 when he was arrested on allegations bordering on treasonable felony and terrorism.

While delivering judgement on Wednesday, Justice Anwuli Chikere, ordered the DSS to release forthwith the iPhones and the sum of N10,000 which were alleged to have been forcefully taken away from him without a court warrant.

The judge was said to have ordered the DSS, the 1st respondent in the case, to also tender an apology in two national dailies within two months.

Chikere described the forceful seizure of the personal property of the publisher of SaharaReporters as “illegal, unconstitutional, null and void and gross violation of his fundamental rights as enshrined in the 1999 Constitution, adding that the DSS ought to have obtained a court order before the confiscation of his belongings and that the seizure can no be regarded as ‘” temporary” since 2019.

The judge further stated that the claim by the DSS that his phones were still under investigation since 2019 over his alleged link with terrorists was untenable, illegal and unconstitutional.

While reacting to the judgement, Sowore’s lawyer, Falana, expressed happiness and described it as a victory for justice for her client.