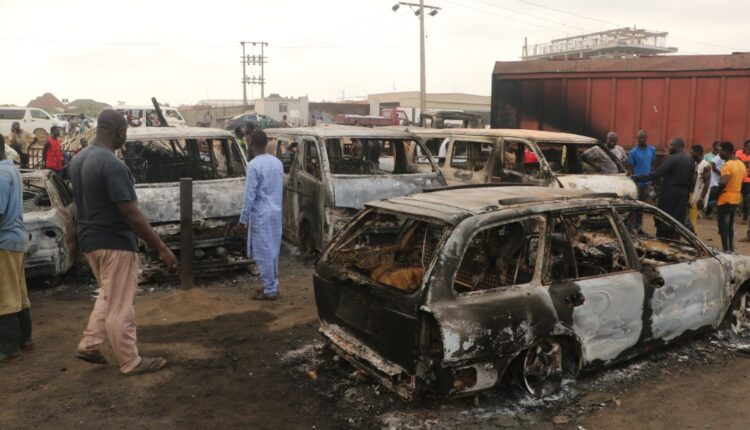 A truck driver and his assistant were said to have been burn to death and dozens of others sustained varying degrees of injuries after a fuel tanker exploded at Kara Bridge end of Lagos-Ibadan Expressway.

Aside from the casualties, no fewer than 29 vehicles were razed by the fire that emanated after the explosion that caused gridlock on Lagos-Ibadan Expressway on Saturday.

The statistics were disclosed by the Federal Road Safety Corps (FRSC) that described the accident as unfortunate but avoidable and that efforts were already in place to put an end to tanker explosions on the ever-busy road.

FRSC Corps Marshal, Boboye Oyeyemi, in a statement issued by the agency’s spokesman, Bisi Kazeem, stated that the deceased driver and motor-boy were burnt to death.

“From the crash investigation report submitted, a total of 2 male adults were killed and burnt beyond recognition, while a wanton destruction of properties occasioned by the fire also left 29 vehicles parked by the roadside burnt down completely,” Oyeyemi added.

He stated that the fatal road traffic crash involved a single Tanker fully ladened with PMS and that investigation conducted at the scene revealed that the driver lost control of its wheels as a result of mechanical deficiency (tyre blow out) making the tanker to fall on the expressway amidst a wild inferno.

Oyeyemi also lamented the actions of hoodlums who prevented the combined rescue teams of the Federal Fire Service and FRSC from approaching the scene of the crash. 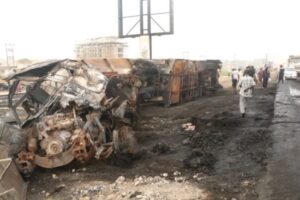 According to him, our personnel got to the scene, they met teams of Lagos State Fire Service who advised our men against approaching the scene of the crash. The firefighters said they were equally deployed to the scene for some reason but on arrival, they were chased back by some hoodlums, carrying dangerous weapons. Both teams had to run to the Isheri Division of Nigeria Police for security cover.

The Corps Marshal also maintained that the Corps is seriously engaging critical stakeholders and making frantic efforts to find lasting solution to tanker explosions on the road . . He called on the Governments at all levels to expedite action towards working out modalities that will support and hasten existing efforts towards fleet renewal as most of the articulated vehicles are aged while efforts are on to enforce compulsory use of safety valves to prevent spillage after falls of tankers.

On the present state of traffic on the road, the Corps wishes to inform the general public that there is no need for panic as the crashed vehicles have been successfully removed from the road and all Obstructions cleared with the road now opened to use. As such, road users already on the Lagos-Ibadan expressway or intending users who have not explored alternative roads should please exercise caution and drive safe; avoid speeding, road rage and ultimately, avoid driving against the flow of traffic. FRSC wishes us safe journey to our various destinations.