How NDLEA arrest Lagos skit-maker, three others for drugs…

Driver dies, others injure during multiple auto crash in Lagos 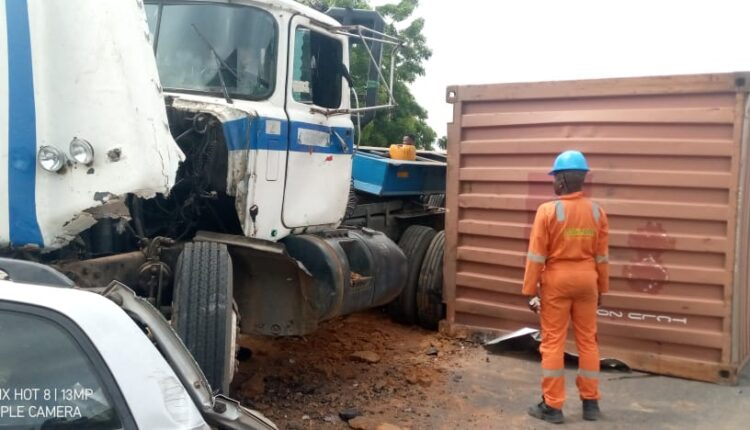 At least one person has been reported to have died and one other sustained varying degrees of injuries after a truck conveying 40feet container rammed into two cars on Otedola bridge in Lagos State.

As gathered, the tragedy struck on Sunday morning after 40feet container fell on the two unidentified vehicles with registration numbers JJJ 28 FR and BDG 597 CY respectively on Otedola bridge.

Confirming the incident, the Lagos State Emergency Management Agency (LASEMA) said that the container pressure on the cars killed one of the driver and that its operatives rescued the truck driver who sustained serious injuries.

LASEMA spokesperson, Nosa Okunbor, through a statement on Sunday, said that the yet-to-be identified, injured truck driver was hurriedly ferried to the Trauma Centre near FRSC Office by old Lagos-Ibadan Toll Gate for proper medical attention.

According to him, remains of the late driver of one of the vehicles, one Mr. Lawal, has been claimed by his relatives, as the agency worked assiduously to conclude the operation by deploying it’s light and heavy duty rescue equipment to evacuate all impediments from the road to restore vehicular activities to the road.

“One adult male lost his life, while driver of the Container Truck sustained serious injuries, and has been rushed to the Lagos Trauma Centre by FRSC Office near old Lagos-Ibadan Toll Gate.

“The affected vehicles have been evacuated off the road with the Agency’s Light and Heavy Duty Equipment. LASEMA Response Teams, NEMA, FRSC and LASTMA were joint responders in the recovery operation,” the statement said.