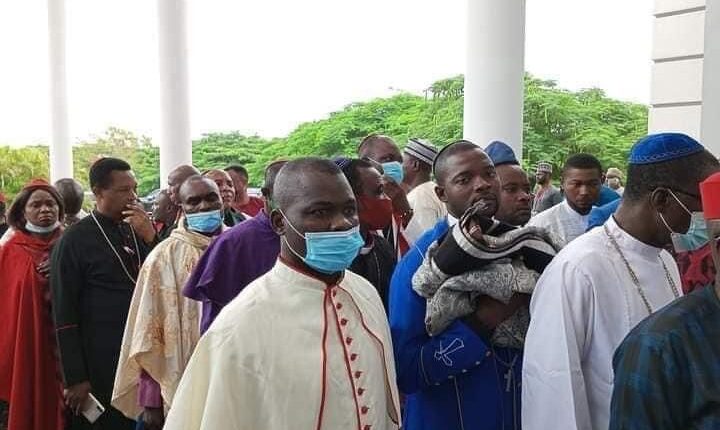 Politicians, Journalists and other guests at the official presentation Borno State former governor, Kashim Shettima, as the running mate of the presidential flagbearer of the All Progressives Congress (APC), Bola Tinubu, were thrown off balance after they sighted Christian clerics file into the premises.

As they walked into the reception of the Musa Yar’Adua Centre dressed in their cassocks and habits, amid heavy security at the venue, guests set their gaze on them, considering that the Christian Association of Nigeria (CAN) had asked all members of the group to disassociate themselves from the ruling party after picking Muslims as both presidential candidate and Vice ahead of next year’s election.

The clerics, who participated fully in the presentation of the running mate before the public on Wednesday were seen not bothered over the attention on them across the hall.

The presence of the clerics, according to many Christians, indicated that the leaders of different denominations across the country had continued to raise concern over the CAN’s stance on the choice of candidates for the 2023 presidential election in the country. 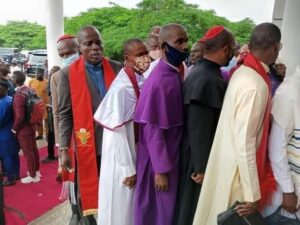 Worried by the development, CAN has challenged the APC to mention pastors and Bishops that attended the unveiling ceremony of its vice presidential candidate.

The Special Assistant on Media and Communication to the President of CAN, Samson Ayokunle, threw the challenge in his short reaction sent to newsmen that seek his reaction on the development.

The aide to the President, Adebayo Oladeji, said, “Let them name the CAN officials at the programme and their offices. If they could use 2017 photos to claim that some Pastors visited Shettima and lied that Pastor Enoch Adeboye has endorsed them, they could do anything.

“Our position on Muslim-Muslim ticket is irreversible. Anybody can claim anything but one thing is clear, CAN was not part of the unveiling programme of Shettima.”

Earlier, after the party announced Shettma, who is a Muslim, Oladeji condemned the APC’s Muslim-Muslim ticket and described the move by the ruling party as inappropriate.
“The Christian Association of Nigeria has stated it clearly that the situation in the country now is not suitable for a Muslim-Muslim ticket. It is up to Nigerians to accept or reject. Today’s Nigeria is not the same as when Nigerians voted Abiola-Kingibe ticket which was eventually annulled. Our prayers are with Nigeria and Nigerians,