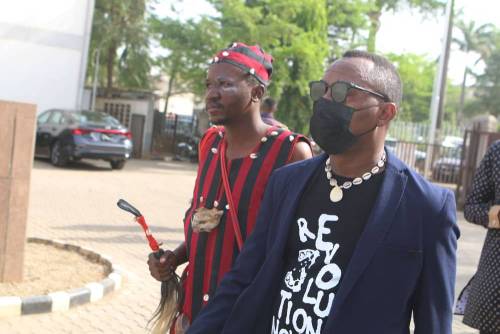 Activities at Wuse, Zone 2 Magistrate Court in Abuja, were for several minutes halted on Tuesday after an unidentified herbalist accompanied right activist and Convener of #RevolutionNow, Omoyele Sowore, to court for the resumed trial of the latter.

The development saw workers among others in the court premises take a pause to catch the glimpse of the herbalist who was dressed in complete traditionalist regalia to the amusement of onlookers.

In a move said to be in solidarity with the embattled Sowore, who is also a journalist and publisher of SaharaReporters, the middle-aged herbalist was seen waving some of his instruments in the air while chanting in native language synonymous to his traditional practice.

While the ensuing drama got to policemen, workers, journalists among others as a surprise, others at the court premises simply burst into laughter with their gaze fixated on the herbalist.

Soworoe appearance at court on Tuesday was not unconnected to the charges of alleged criminal conspiracy, unlawful assembly, and inciting public disturbance preferred against him by the Federal Government after the activist was arrested alongside four others on New Year’s Eve for organising a candlelight procession.

It would be recalled that the court had in January granted Sowore, alongside four others arrested with him bail in the sum of N24 million.

The court ruled that Sowore be granted N20 million bail with two sureties while second to fifth defendants, Juwon, Damilare, Kimrele, and Peter, were further admitted to bail in the sum of N1 million and one surety in like sum.

The court further ordered that one of the sureties to be presented by the first defendant must be a civil servant not below grade level 12 in Federal Civil service.

Aside from the bail conditions, Magistrate Mabel Segun-Bello, while ruling on the bail application, ordered Sowore to remain within Abuja until the case is determined.

Segun-Bello also mandated Sowore to often physically report to the court registrar every Monday and Friday pending the hearing and determination of the case against him by the Federal Government.

It would be recalled that Sowore and four others were standing trial for alleged unlawful assembly, criminal conspiracy, and inciting public disturbance.