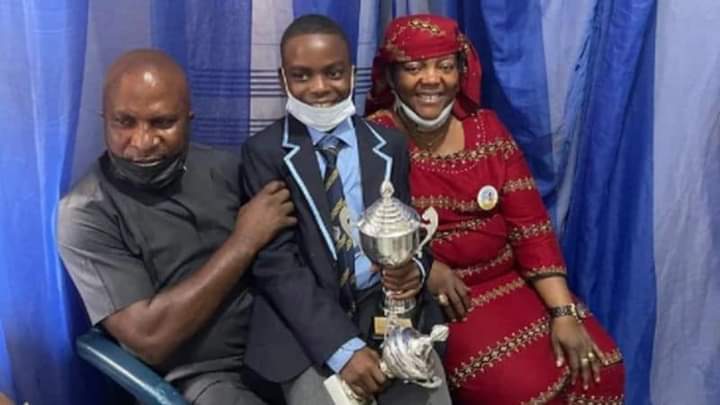 The narration of Mr. Oromoni, father of late Sylvester Oromoni Jnr, a 12 years old student of Dowen College, an elite school in the Lekki area of Lagos yesterday on Zoom was heart wrenching: “My son told me he was tortured by senior students who also forced him to drink a substance right inside Dowen College, Lekki, hostel.”

“They entered his room, switched-off the light and threatened to kill the other students who witnessed what they did to my son.”

According to him, “the deceased mentioned the names of five persons responsible for the pain before he finally gave up the ghost on Tuesday, as allegations were also rife that two of them had been ferried out of the country by their parents.”

Oromoni Snr revealed that his son was subjected to severe bullying, disclosing that the boys who allegedly bullied Oromoni Jnr had been reported to the school management the previous term.

Dowen College had earlier blamed his death on injuries suffered while playing football. But following public outcry, the Lagos State Government has ordered the school to be shut down until the Education Ministry and relevant authorities conclude a probe into Oromoni Jnr’s death.

The story of Chidalu, another victim of bully in another boarding school was equally mind boggling, as narrated by his Mum: “Mummy, they hit me and locked me inside a cupboard for two days” Chidalu muttered to me silently. My heart flew and his dad had his eyes opened wide.

“Who are they?” He asked Chidalu.

“They said they will kill me, they always eat all my provisions and take my boxers and singlets, they gave me Fayrouz to take forcefully then beat me.”

I was already crying and boiling. “Suddenly Chidalu began jerking with foams coming out of his mouth, his eyes began turning white. My Chidalu heaved and went stone cold. He died in my arms. My only son! My only child!”

Another bad case is that of Nifemi Olajide, a student of Caleb University, a private institution in the Ikorodu area of Lagos.

Oluwanifemi, an undergraduate studying Computer Science reportedly disappeared after sending disturbing messages to his elder sister, Stella, on WhatsApp, that some suspected cultists wanted him dead.

I experienced the bullying system in the boarding house in my secondary school. I confronted it in my own way with the support of my principal Mr David Akintola.(Please read this in my soon to be finished autobiography by the Grace of God).

The cases have become a sad commentary signifying the collapse of values and morals in our society.

Sociologists hold the view that the family, the school and religious institutions are the tripod on which the socialization of the society rests.

But recent happenings in our country have just shown that these pillars are shaking and the values are eroding at an alarming rate.

At the family level, parents who failed to raise their kids properly have turned secondary schools into rehabilitation centres. They want schools to do what they should have done. Many of our religious institutions have also diluted the message of love and peace in their quest for personal aggrandizement.

The result of the deviant behaviors we have on our laps today from the young, the old, the rich, the poor, the mighty and the minnows. Most of the big crimes such as robbery, kidnaping, murder, cybercrimes, etc are offshoots of “minor” crimes like bullying.

We had also before now, believed that bullying is a pastime of the children of the poor, but Dowen College, an elite school in the rich enclave of Lekki has shattered this illusion.

The bullying virus has also gone beyond physical assault to the realm of emotional and intellectual bullying as we now witness on social media where people assault you for holding a contrary view to their opinion.

The way forward is to reclaim our sanity and repossess our values.

The foundations in the family, schools and religious institutions must be re-built. Prosperity, fame and fortunes without morals are valueless and dangerous. There must be restoration for the Sanctity of Life, rights and dignity of others.

The nation will be in peril if we allow the value system to perish.

This is why we must support the effort of the Lagos State government to investigate and get justice for Sylvester Oromoni. The Local Government system must come back to live as a closer level of Government to the community. Ministry of Information with it orientation agencies such as National Orientation Agency must wake up!

Human life, no matter where and how it is, is sacred and should be protected.

Gbenga Olawepo-Hashim is a former presidential and one of the founding members of the Peoples Democratic Party (PDP).