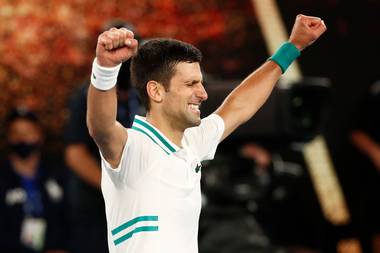 The victory extended Djokovic’s record to three in a row in front of a Melbourne crowd and marked the 18th grand slam title for the Serbian, placing him in third position on all-time grand slam wins behind Spanish player, Rafael Nadal, and his Switzerland counterpart, Roger Federer, who both have 20 titles.

The champion, 33, started as nervelessly as you’d expect on Sunday, given his record down under, and raced into a 3-0 lead in the opening set before Medvedev surged back to parity, firing ace after ace.

As the match progressed, the pair then slugged it out for the remainder of a relentless opening set, Djokovic notably keen to draw his opponent to the net before the Serbian produced a brilliant break in game 12 to seize the initiative.

He would not let it go, capitalizing on a couple of ragged service games early in the second set to race into a commanding lead. Medvedev had lost any foothold he had in the match and his frustration became apparent when he smashed his racquet at the back of the court after game seven. The rest then felt inevitable, Djokovic wrapping up the second set with a booming forehand service return down the middle of the court.

At that point, it was easy to forget that Djokovic had endured a fraught start to the tournament. His open letter to the organizers regarding the quarantine conditions faced by players was criticized by a number of his fellow pros, including Australian Nick Krygios, who branded Djokovic a “tool“. The Serbian argued his words had been misconstrued and also expressed fears he may miss out through injury.

But the off-court actions of the increasingly divisive world number 1 seemed to bother a few of those in excitable an 85 percent full Rod Laver Arena. At one point in that dominant second set, Djokovic put his fingers to his lips to try and calm a crowd that had turned against him.

Despite the interruption of a five-day lockdown in Victoria, the state where Melbourne lies, during the tournament, the Open has been one of the first major international sporting events to welcome fans since the coronavirus pandemic begun.

Though some in the stands may not have got the result they wanted, there’s little argument that they witnessed a player at the top of his game. With Federer and Nadal a few years older, Djokovic could easily surpass both in an era dominated by the big three in the men’s game.

That feeling of inevitability that came to the fore in set two, very briefly flickered with Djokovic’s first double fault of the match in the third set opener. But Medvedev failed to take advantage of two breakpoints and the aura around his opponent quickly returned.

It was all too much for Medvedev, and the 25-year-old’s game started to unravel along with his mental fortitude on the court. The Russian was swinging from the hip but had clearly lost belief against his unwavering opponent. He is not the first, and he’s unlikely to be the last to suffer such a fate against Djokovic, who wrapped up Australian Open number nine with a convincing overhead that summed up a dominant display.