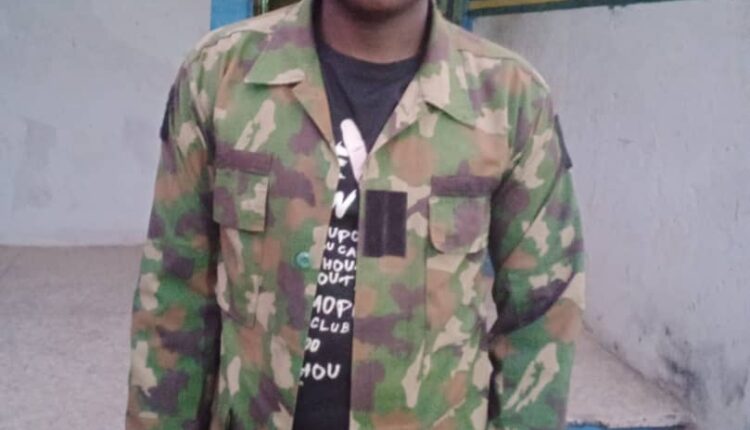 A Nigerian Army dismissed officer, Johnson Godday, has been arrested and detained by the Nigerian Police, Lagos Command for allegedly attacking and dispossessing commuters in Ogudu axis of Lagos of their property.

Godday, an indigene of Edo State, was arrested by the law enforcement agency attached to Ogudu Police station after dispossessing a commuter, Onyebuchi Nwanga, who resides at 24, Bayo Oshinowo Street, Ogudu, Lagos, of his mobile phone.

The suspect, who confessed to being attached to NA 149 Batallion, Ojo, Lagos before his dismissal, was nabbed by the law enforcement agency at Emmanuel street junction, a few meters away from the scene of their operation.

Confirming the arrest, Lagos Police Command spokesman, Olumuyiwa Adejobi, in a statement made available to The Guild on Monday, said that Godday was arrested with the Nigerian Army uniform during the operation.

Adejobi added that the suspect, currently under detention, was arrested yesterday at about 10:15 pm and has since been furnishing the police of his mode of operation.

He said: “One Onyebuchi Nwanga ‘m’ of No. 24, Bayo Oshinowo Street, Ogudu, Lagos reported that at about 2215pm of Sunday 21st February, 2021, while alighting from a tricycle with his friends at Emmanuel street junction, they suddenly noticed two men, on a motorcycle, in military uniform, who attacked them and snatched his Infinix smart 5 phone.

“He further stated that when they raised an alarm, the policemen attached to Ogudu Division on duty around the scene came to their rescue and arrested the suspect in Army uniform while the other, also in the Nigerian Army uniform, escaped with the motorcyclist. The snatched phone was immediately recovered from the suspect”.