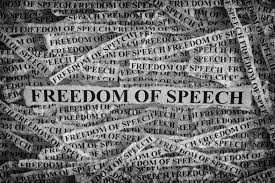 Debate is raging across the world on individual freedom, free speech, security, and taking responsibility. Nations — including older, liberal democracies like the United Kingdom and Canada — are taking firm steps to peg the boundaries between free speech, public order, and national security. They are aggressively drawing the line that no one must cross in the name of free speech. This is understandably pitting governments against free speech advocates. This is a debate that will not go away. However, both sides will have to agree on something: our world is bleeding from unrestrained rights. We must also agree that rights without corresponding responsibilities ultimately lead to the Golgotha.

The rate at which people publish falsehood or malign other people’s character in the new media should bother every patriot who seeks an orderly society. And particularly worrisome is the attempt to give political cover to felons or people accused of defaming other people or destabilising society. No society cowers in the face of irresponsible free speech. Nigeria should not; Kwara will not.

“Crime is crime. It is not political, it is crime,” iconic Margaret Thatcher had told reporters in Riyadh in 1981 when asked about the status of Bobby Sand, an IRA firebrand who was serving jail terms for his involvement in terrorism. In another of her stoic self, Thatcter declared that “there is no question of political status for someone serving a sentence for crime.”

People must have the right to express their views, including online, on-air, and in publications. Freedom of association, except for that of a secret cult, is also a right guaranteed under our laws. But people, by the same stroke, will also be responsible for what they say. And it will not be acceptable for anyone to shout blue murder if they are called to account. Even the Holy Books make it clear that every soul shall be accountable for what they do. It is an act of cowardice, and mischief, to not want to be called to account for our actions.

A man standing in the middle of a cinema yelling ‘fire, fire’ when there is none and causing pandemonium that causes deaths to innocent people has broken the law, and will be found guilty in a competent court of law for the public incitement or worst murder charges. Freedom of speech means you are free to say what you want, but you are equally responsible for the fallouts of what you say.

Tomorrow is in the womb of time. But if some happenings now are anything to go by, the next 24 months in Kwara will be decisive for its people and their future — perhaps more decisive than 2019 when political myths and facts known to generations were demystified. The 2023 polls in Kwara look certain to confirm whether the people were indeed tired of the old ways, the annual mysterious deaths, the political monopoly, and lack of inclusive growth, or they were railroaded to ease out the old order. Many have called it a rematch, and I agree it is something to look forward to.

Before then, however, it is important to put a few things on record. Foot soldiers of the old order insist they were victims of propaganda and lies, although facts, figures, lived realities of the people in the north, south, and central of the state, and confessions of some of their own the great and the good do not support such claim. Nonetheless, they promise to do everything to regain power using propaganda and lies deployed through radio and ubiquitous social media. In other words, the next 24 months will see the incumbent Governor, AbdulRahman AbdulRazaq, and his team, subjected to the most horrendous propaganda in recent history not only by those who feel it is their birthright to own and govern the state as they wish but also by their closet allies masquerading as nonstate actors, latter-day democracy activists, and estranged Otoge commanders and foot soldiers whose idea of ‘good governance’ is same as the old order.

The argument in the next 24 months will not be that the Governor has not taken care of the poor. The Governor’s social safety programme, by far the largest and most transparent by any subnational government in the country, will shut down that claim. It will not be a lack of impactful or inclusive governance across the state, for his projects are scattered across various electoral districts while his non-discriminatory programmes target every demography, particularly youths and women. Indeed by 2023, with the innovation hub, garment factory, the visual arts centre, and a lot more, likely to have been completed and his agricultural transformation plan at full throttle, the state would be on the map as one of Nigeria’s best in the 21st century economy. The argument will be built on pettiness and around issues that do not productively shape the future of Kwara and its people.

There will be unceasing attempts by the old order and their allies to manipulate the populace in the coming months. Fake news, doctored videos, and audios — such as were released following some recent Eid outings during which Kwarans showed their affection to their Governor — sexed-up figures, forged documents, and jaundiced online media analysis will be rampant. All will be designed to instigate the people against the government and gain unfair political advantage. The government will as a duty operate by the law while these last; it will not be stampeded into making rash decisions or trampling on rights. But security agencies will, in the interest of our society and the sanity of all, act decisively against anything that threatens public peace while officials targeted in fake news will also have the right to invoke their rights as the law permits without being blackmailed into silence. After all, justice is three-way traffic: justice for the accused, justice for the accuser, and justice for the state.

•Rafiu is CPS to the Governor of Kwara State