WHO raises concerns over Nigeria, South Africa, others… 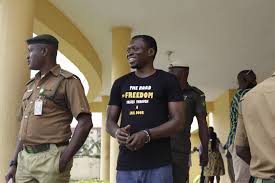 After 175 days in detention, embattled journalist, Agba Jalingo, has been granted bail by the Federal High Court in Cross-River State, ruling that it was not convinced that the journalist presented a flight risk.

The prolonged trial garnered public outrage, with residents claiming that the journalist was persecuted after he was denied bail thrice by Justice Simon Amobeda, who had earlier presided over the case.

Justice Sule Shuaibu, of the Cross-River State High Court, on Thursday, while presiding over the case granted Jalingo N10 million bail with one surety in like sum.

Shuaibu noted that Jalingo needed to present a surety who was resident in the State, to meet his bail conditions, and that once met, Jalingo was expected to get notify the court of any plans to travel, which would be subject to court permission.

The Judge also reiterated that the case was still in court, as a result of which all involved parties were expected to keep court proceedings, on the case, off media space and adhere to conditions as laid out by the apex court.

“Agba Jalingo must deposed to an oath that he will be available in court, as at when due and expected of him, while he and his surety must present two passport photographs,”

“The case has been adjourned to the 6th, 7th and 8th days of April 2020 for the prosecution to open and close its case while other motions may be treated before that day,”

“Let all parties maintain status quo and honor all rulings of this honourable Court”.