JUST IN: Saudi lifts ban on Nigerians, others ahead next… 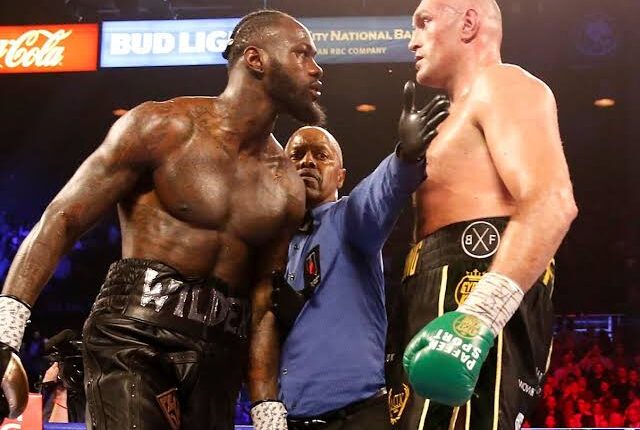 American boxer, Deontay Wilder, has promised to all within his power by recovering, training harder to reclaim the WBC heavyweight title after his second defeat in his effort to reclaim the number one spot.

Aside from his determination to reclaim the title, he also refuted claims that he was considering retiring from the ring after he was knocked out by Tyson Fury in their WBC heavyweight world championship fight on Saturday.

Fury (31-0-1) weathered the early storm to outbox Wilder and landed the decisive blow in the 11th round to close out their trilogy and remain the undefeated lineal champion.

Confirming his continuous participation, the American boxer’s trainer, Malik Scott said that the former world number one would still continue fighting in the respected category with worthy opponents.

Scott said that Wilder (42-2-1) deserved to have more high-level fights and be involved in main events.

“Deontay has set his family financially secure so he doesn’t have to fight to make a living,’’ Scott told iFL TV. “But retiring is not in his plans at all and not something we’ve discussed.’’

“Deontay was great on Saturday, but Fury was even greater — it was a great night of boxing for the heavyweight division,’’ he added.

“You have to give Fury credit for having a good chin and getting up. Fury is a legend, one of the best in the heavyweight division in any era, and its the same about Deontay.’’

It would be recalled that the British heavyweight boxer, Tyson Fury, knocked out Wilder to retain the WBC belt during a trilogy bout in Las Vegas, United States.

Fury sent his opponent sprawling in an explosive third, only to see Wilder recover and the Briton found himself on the end of the Bronze Bomber’s huge right hand twice in quick succession.

Wilder was hanging on by the end of the seventh on Sunday morning but was still in a gruelling fight come the 10th, when Fury knocked him down once more, before delivering the final blow in the 11th to bring this particular chapter of heavyweight boxing to a close.

The bout which came 24 months after Fury dethroned the American, afforded the Briton an opportunity to show all his resolve and resilience to extend his undefeated professional record to 32 fights after twice being floored in the fourth round.

Speaking after winning the bout, the British boxer said: “I was down a couple of times, I was hurt, Wilder is a strong puncher. It was a great fight. I will not make any excuses, Wilder is a top fighter, he gave me a run for my money. I always say I am the best fighter in the world and he is the second-best. Don’t ever doubt me. When the chips are down I can always deliver.”