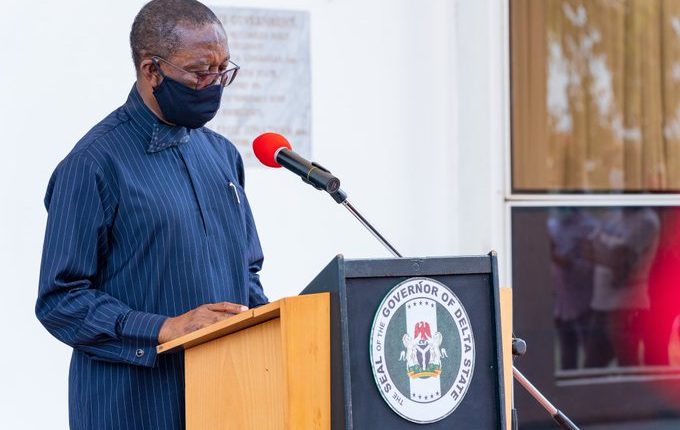 The Delta State Government has released new coronavirus prevention guidelines, mandating the use of protective face masks for residents within the state with aim to curb spread of the deadly coronavirus pandemic within its borders.

It also lifted ban on public gatherings such as wedding ceremonies and burials, saying that such events would be allowed a maximum number of 50 attendees and that social distancing conditions must be upheld by conveners.

The State Governor, Ifeanyi Okowa, said that the relaxed coronavirus preventive directives were aimed at enabling Delta state residents to go about their daily activities while being protected from possible spread of the deadly viral pandemic and that adherence to the regulations would be enforced in order to curb community transmission of the infection.

Okowa, who released the state’s updated coronavirus prevention guidelines through a post made on his social media page on Tuesday, stated that the directives had been instituted according to the state Public Health Law, and that implementation would commence from Thursday, April 30, 2020.

He revealed that restaurants, canteens and hotels would be allowed to resume activities in the state while bars and nightclubs would remain indefinitely closed, and that public transportation providers would also restart operations in line with the guideline’s provisions.

Okowa added that schools would, however, remain closed until May 31, 2020, and that the state’s airport would be shut down to all air traffic until otherwise decided.

“It shall be mandatory for all residents of Delta State to utilize face-masks in public places. ‘Public places’ include offices, markets, malls, supermarkets, salons, hospitals and health clinics, churches, mosques, and all other ‘approved’ gatherings. All conferences, sporting activities, gathering of people in convention/event centers, sports fields, public/open spaces, as well as recreational and cultural/communal activities remain banned until 31st May 2020″, he said.

“All entertainment centers, including cinemas, bars, and night clubs will remain closed until Sunday, 31st May 2020. All restaurants and canteens are to operate a strict ‘take-away only’ policy; while hotels will be allowed to open (with in-room dining). Transport services will be allowed to operate. However, they must not exceed the following numbers of passengers: Kekes — 2 passengers at the back; Taxis —1 passenger in front and 2 at the back; and 16/18 Seater Busses — 10 to 12 passengers maximum”.

The governor said that though religious gatherings remained banned, discussions were in progress with aim to reach a working consensus among faith leaders resident in Delta state.