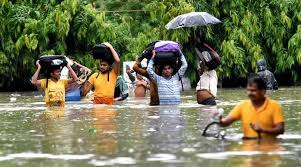 At least, no fewer than one hundred people have been reportedly killed after a deadly flood hit Indian states of Uttar Pradesh and Bihar,  the disaster of which was said to had been caused by heavy rains in both states.

It was gathered the flooding’s effect disrupted railway operation, vehicular movement, healthcare services, schools and power supply among others.

Meanwhile, in a report from one of the state’s disaster management authority, an Uttar Pradesh government, it was indicated that 93 people had died since last Thursday, while Bihar had 29 death report.

According reports, residents from the states were confirmed to be navigating roads through help of  boats due to the flood that had overtaken the cities.