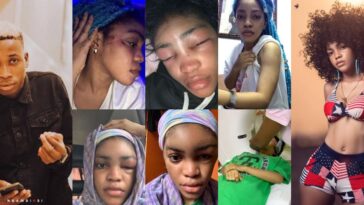 The music company explained that the move had become after the label’s in-house investigations revealed that the artiste’s action could not be justified on any basis.

Nigerians had yesterday condemned Lil Frosh, recently signed by DMW for physically assaulting his girlfriend without reasons for his actions after evidence of the assault surfaced on social media.

Some of the Nigerians who wronged the artiste for his actions argued that Lil Frosh went too far for assaulting the young lady and that authority should do the needful by bringing the young man to book as he was said to have been assaulting his video vixen girlfriend few days after their relationship started.

Responding to calls by Nigerians, popstar, Davido, born David Adeleke, through a statement released on his social media page on Tuesday, said that the label would not support issues bordering on domestic abuse.

“In light of recent allegations made against Mr. Sanni Goriola Wasiu a.k.a. Lil Frosh, we would like to state that as a record label, domestic violence is not a trivial matter and we will never support or condone such behavior. There is no excuse for the actions of Lil Frosh and we understand that there is nothing that can be said or done to take away the insensitivity shown.

“Upon internal investigations carried out by the label, we are left with no option than to terminate the recording contract that exists between the label and Lil Frosh, effective immediately. We hereby immediately severe all affiliations with Mr. Sanni Goriola Wasiu a.k.a. Lil Frosh. Once again, we do not condone domestic violence and stand with all victims of domestic violence,” the statement said.