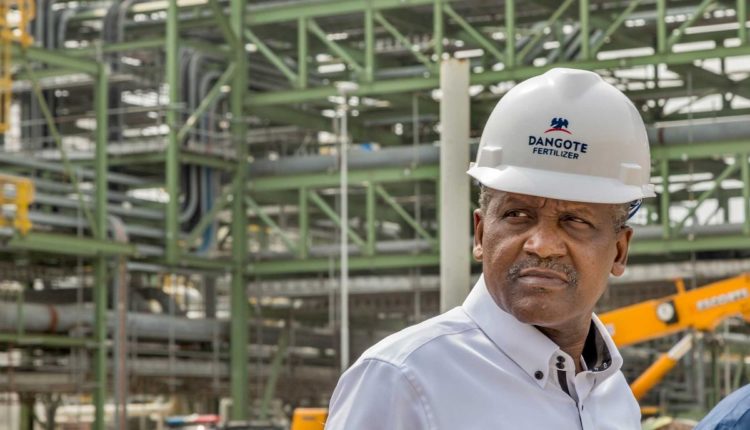 The Chairman of Dangote Group, Aliko Dangote, has retained his position as the richest man in Africa, with a net worth of $12.1 billion.

Data from the 2022 edition of the Forbes’ Top 10 Africa’s Billionaires List showed that for 11th year in a row, Dangote remains the continent’s richest person, worth an estimated $13.9 billion, up from $12.1 billion in 2021.

According to the report, the $13.9 billion estimated net worth followed a 30 per cent increase in the stock price of Dangote Cement, his most valuable asset.

Through a statement on its social media page, the magazine noted that a surge in housing developments in Nigeria and growth in government infrastructure spending drove higher demand in the first nine months of 2021. The report added that Africa’s billionaires were richer than they had been in years, despite the global pandemic.

As a group, the continent’s 18 billionaires were worth an estimated $84.9 billion – a 15 per cent increase from twelve months ago and the most since 2014, when a larger number of billionaires–28–were worth a combined $96.5 billion.

On average, the continent’s billionaires were worth $4.7 billion now, worth $3.4 billion in 2014 with soaring stock prices from Nigeria to Zimbabwe lifted the fortunes of these tycoons, as demand for products from cement to luxury goods ticked up.

Jumping into the the number two from the list, spot–up from number four last year was luxury goods magnate, Johann Rupert of South Africa.

More than 60 per cent surge in the share price of his Compagnie Financiere Richemont–maker of Cartier watches and Montblanc pens–pushed his fortune to $11 billion, up from $7.2 billion a year ago, making him the biggest dollar gainer on the list.

The biggest gainer in percentage terms–up 125 per cent was Strive Masiyiwa of Zimbabwe, worth $2.7 billion, up from $1.2 billion last year.

Shares of Econet Wireless Zimbabwe, which he founded, rose more than 750% in the past year, helping to drive up the size of his fortune.

Another gainer: Nigerian cement tycoon Abdulsamad Rabiu, who is $1.5 billion richer after taking yet another of his companies’ public. In early January 2022, Rabiu listed his sugar and food firm BUA Foods on the Nigerian stock exchange.

He and his son retained a 96% stake in the company, which recently had a market capitalisation of nearly $2.8 billion. (Forbes discounts the values of stakes when the public float is less than 5 per cent). UA Cement, in which he and his son had a 96% stake, listed in January 2020.

According to the release, only two of the 18 billionaires are worth less than in 2021: Koos Bekker of South Africa, who dropped to $2.7 billion from $2.8 billion as the share prices of consumer Internet firms Naspers and Prosus fell more than 20per cent each.

Mohammed Dewji of Tanzania, whose fortune declined to an estimated $1.5 billion from $1.6 billion a year ago, due to lower multiples for publicly traded competitors.

The 18 billionaires from Africa, who were not new to the ranks, also hailed from seven different countries, South Africa and Egypt each had five billionaires, followed by Nigeria with three and Morocco with two.

All of the continent’s billionaires were men; the last woman to appear in the ranks, Isabel dos Santos of Angola, fell off the Forbes list in January 2021.

Forbes noted that the list tracked the wealth of African billionaires who resided in Africa or had their primary business there, thus excluding Sudanese-born billionaire, Mo Ibrahim, who is a U.K. citizen.

The billionaire London resident, Mohamed Al-Fayed, an Egyptian citizen. Strive Masiyiwa, a citizen of Zimbabwe and a London resident, appeared on the list due to his telecom holdings in Africa.

It added that the Net worth were calculated using stock prices and currency exchange rates from the close of business on Wednesday, Jan.19.

“To value privately held businesses, we start with estimates of revenues or profits and apply prevailing price-to-sale or price-to-earnings ratios for similar public companies. Some list members grow richer or poorer within weeks-or days-of our measurement date,” Forbes said.