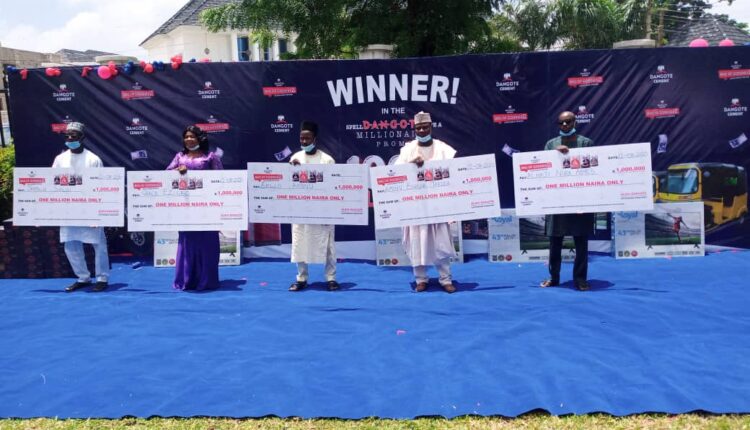 Share
As part of measures to ease impact of coronavirus pandemic on Nigerians, Dangote cement company has disbursed N1 million each to five Nigerians as economic support in Kano State.
The five Nigerians presented with the cash were five winners gotten in Kano under its promotional programme, Dangote Bag of Goodies promo.
As gathered, the five winners: Jamilu Salisu,  Grace Ezigbo, Bello Aminu , Aminu Bukar Makoda,  and Nura Ahmad.
At the prize presentations on Wednesday held in Bompai axis of Kano metropolis, Chief Commercial Officer for Dangote Group, Rabiu Umar, hinted that the success recorded in the first phase made the company to decide that second phase of the promo, tagged Bag of Goodies 2, should commence.
While saying that the fund was designed to cushion effects of the coronavirus, he stated that the promo was a palliative to cushion the virus effect on customers.
Umar explained that last year, the company was able to distribute 1,000 cars as grand prize, adding that due to the effect of COVID-19 on the economy, the company had decided to award N1 million grand prize to the winners each.
According to him, despite effects of COVID-19 on the global economy, Dangote cement company has decided to go ahead with the Bag of Goodies promo in order to give back to the society. ‘’
”This promo is like a palliative to our teeming customers who have suffered economic hardship, occasioned by the pandemic. Therefore, this would at least cushion the effects of the pandemic.
“We feel that despite the  pandemic, it is worthy to put a smile on the face of our teeming customers across the country. I am sure we have achieved out aim in this round of the promo, ” he added.
On her part, Marketing Director, Dangote Cement Company, Funmi Sanni said that the promotion was to encourage the customers to continue patronizing the product, which according to her, is the best in Nigeria.
Sanni explained that five people will win N1 million instant cash prize, as other customers could win motorbike, tricycle, TV set, recharge cards, among other prizes in the promotion that will end on November 5, 2020.
Dangote Cement Company, Marketing Director, noted that a customer could only win the N1 million cash prize when collecting the scratch cards that each carries letter D, A, N, G, O, T and E to make up the name DANGOTE.
She appealed to Kano people to patronize Dangote cement considering its quality and durability