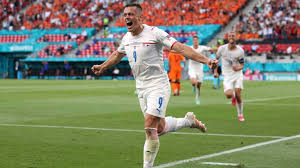 Share
After days of intensed football, the ongoing Euro 2020 tournament has recorded it’s first upset following the 2-0 defeat suffered by the Netherlands national football team during their second round match against Czech Republic.
The efforts by the Dutch team to edge out the Czechs experienced a major setback after their key defender, Matthijs De Ligt, was issued a red-card for denying an opponent player, Patrik Schick, a clear opportunity at goal and shown the exit and Netherlands was down to 10-men.
And at the 68th minutes of the game, barely 12 minutes after the Dutch were reduced to 10-men, the Czechs scored through Tomas Holes and Schick doubled the another 12 minutes later to end Netherlands hopes of progressing to next stage of the competition on Sunday.
With the victory, the Czechs would be confronting Denmark, who edged out Wales, without there two major players, Yussouf Pilsen and Christian Eriksen, in the quarter-finals next Saturday.
Earlier during the game played at the Puskas Arena in Hungary, the first half ended goalless but encounter changed when De Ligt was sent off on 55 minutes, after he handled the ball on the edge of the box and denied Schick a goal scoring opportunity.
The referee, Sergey Karasev from Russia, had initially showed a yellow card, but Video Assistant Referred (VAR) intervened, and the Dutch centre-back was shown a straight red, ending his time on the pitch.
Realizing that they have a one-man advantage, the Czech Republic then pushed forward in numbers and got their reward minutes later, when Holes fired them ahead following a set piece. Schick then scored his fourth of the tournament to double their lead and clinch the win.