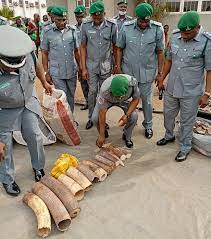 As part of efforts to protect wildlife, the Nigeria Customs Service has impounded another haul of pangolin scales and elephant tusks in Lagos worth N3.1billion worth from traffickers in Lagos State.

As gathered, the Customs intercepted the items from a Sport Utility Vehicle with number plate KRD 541 HH while carrying out a routine check on vehicles plying the Lekki-Epe expressway in the state

Confirming the seizure, the Comptroller General of Customs, Hameed Ali, said that the wildlife property were intercepted by men of the CGC Strike Force.

Alli, who was represented by the outgoing National Public Relations Officer of the Service, Joseph Attah, on Wednesday, assured Nigerians that the law enforcement agency would not relent in ensuring that the country’s wildlife gets adequate protection.

Addressing pressmen on the seized items, the Comptroller General disclosed that the N3.1billion worth of wildlife items were intercepted on February. 2nd.

“Upon credible intelligence, the CGC’s Strike Force stormed Lekki area of Lagos and intercepted one Toyota Sienna bus with registration number KRD 541 HH with chassis: STDZA23C955338572 suspected to be loaded with un-Customs goods.

“Immediately, the vehicle with its content, including four occupants (all Nigerians) were taken to the station and detained.

“Upon 100 joint physical examination, the following items were found: 15 sacks of Pangolin scales and four sacks of elephant tusks.

Ali noted that the operation was conducted in collaboration with the Wildlife Justice Commission, targeting the illegal trade of wildlife from Africa to Asia.

He said that what was seen today was the fourth major seizure of Pangolin scales, ivory, and other assorted wildlife parts in Nigeria within the last 13 months.

“We wish to specifically commend the Wildlife Justice Commission for their continued commitment to this cause through the provision of credible and actionable intelligence.

“Nigeria Customs appreciates this working synergy and look forward to more,” he said.