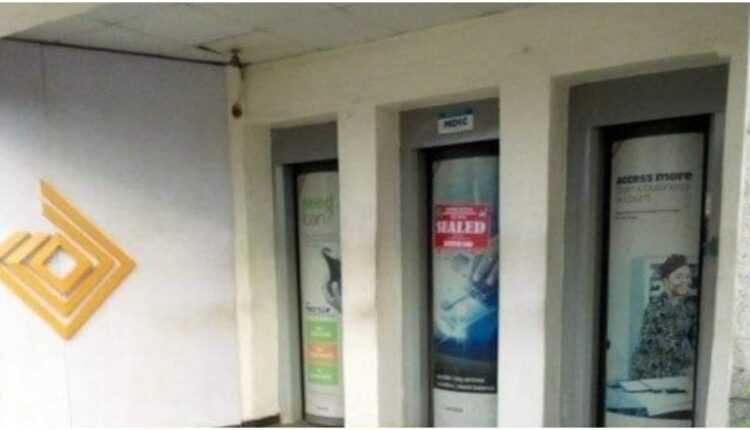 Dozens of Commercial banks staff and customers in Owerri were stranded after the Imo State Government sealed the premises of financial institutions for erecting their structures without obtaining the required approval.

Customers that had thronged the branches of the financial institutions to complete and perfect their transactions, as well as staff, became frustrated after the government officials arrived suddenly appeared and ordered everyone to leave and sealed the bank.

Some of the banks sealed by the state government through the Owerri Capital Development Authority (OCDA) include Access, Polaris, First Bank, EcoBank, and United Bank for Africa (UBA) situated along the Okigwe road and around the state capital.

An Access Bank customer who identified himself as Chukwuka asked: ‘How could the state government just wake up one morning to seal a bank over the flimsy excuse that a bank that has been carrying on its business in a particular building for over twenty years has no building approval? Was it not the same OCDA that gave its approval to the buildings? Many people who have come here to transact one business or the other with the bank are just stranded.’

Okolie Julius, a customer of the UBA, accused the state government of being insensitive to the plight of the people of the state before embarking on its action.

According to him, ‘this government is not sensitive to the suffering of the people otherwise, they could not have sealed the banks to deny customers access to carrying out their legitimate business. We are still suffering the fuel problem in the state which is a consequence of the government’s refusal to dialogue with the petroleum marketers in the state. This government is just punishing the people of the state for whatever reasons best known to it.’

Another aggrieved bank customer complained that since the start of the Uzodinma administration, it has been one problem or the other for the residents in the state.

A staff of one of the sealed banks who spoke on the condition of anonymity told that officials of the OCDA have been harassing the banks since the inception of this administration over sundry development levies.

‘Since the inception of this administration, the OCDA and other officials of the state government have been harassing banks over a plethora of levies. OCDA is now claiming that the building which is housing the bank has no approval but don’t forget the building they are talking about was built during the administration of Ikedi Ohakim and it is the same OCDA that gave approval for the building. Is it not funny for the same OCDA sealing the same building for not obtaining an approval?’

Fulani herdsmen killed over 100 Army, Police, others in Benue- Ortom