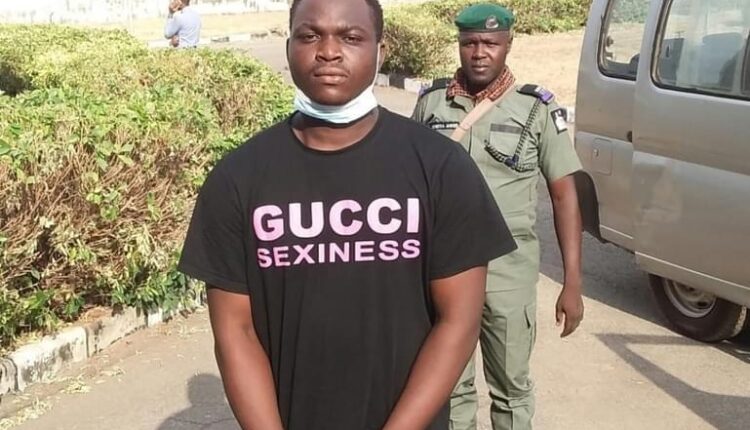 Ogaraku was arraigned by the Economic and Financial Crime Commission (EFCC), Makurdi Zonal Office for a one-count charge bordering on obtaining funds by false pretence before justice Mobolaji Olajuwon.

During the hearing, EFCC said the convict obtained money from one Otokpa Orinya as payment for cryptocurrency on the pretext that he had the same for sale.

Victor pleaded guilty before court after the charge was read before him yesterday during the court proceedings, even as he appealed to the judge for leaniency.

The count against Victors reads, “That you, Victor Chinemerem Ogaraku, sometime in November 2020, in Makurdi, within the jurisdiction of the Honourable Court, with intent to defraud, did obtain the aggregate sum of N257,500 from one Otokpa Orinya as payment for cryptocurrency, under the pretence that you have same for sale.

In the charge filled by EFCC, the convict was found to have committed the offence of fraud contrary to Section 1 (1)(a) and punishable under Section 1 (3) of the Advance Fee Fraud and Other Fraud Related Offences Act, 2006”.

After the defendant’s admittance, the prosecution counsel, George Chia-Yakua, prayed the Court to convict and sentence the defendant accordingly.

Justice Olajuwon convicted the defendant and sentenced him six-month imprisonment with an option of N50, 000 fine.

In a statement disclosed by the anti-graft agency spokesman, Wilson Uwajuren said the court further ordered that the convict restitute the sum of  N257, 500 to the victim.