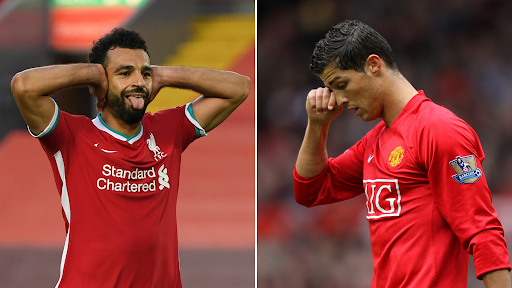 The legendary Fuji creator, late Sikiru Ayinde Barrister, sang about a sudden rich man that would not allow the world to rest because he wanted to celebrate Sallah.

Fantasia reminds one of a rich man who had been celebrating Sallah for more than 20 years and never made noise about it. They slaughtered rams each year and they are still doing it.

Just as Koledowo did in Koto Orun, Mo Salah fans are on the street now hailing the Egyptian because he killed a GOAT last weekend. Three goals, they said they are done. “Ile wa kun so-so”, that is their song.

They should be reminded as Sikiru puts it off a Ronaldo who had been scoring hat tricks for a decade and he is yet to stop at his age in the game.

Comparing Ronaldo and Salah at this age shows how durable Ronaldo is. Ordinarily, Ronaldo should not be competitive anymore but here he is trading tackles with the new breeds at his age.

Mo Salah is in his prime and I’m waiting to see his performance at 36 so that I can put him side by side with Ronaldo or the Argentine midfield maestro, Lionel Messi. But I’m happy that Ronaldo’s critics finally recognise him as GOAT after the Liverpool game.

Age is a factor in sports but the emotion of most fans have so much beclouded their sense of judgement that they do not only criticise Ronaldo, their words carry personal hatred. Ki lodeeee. O le to yen ni?

Pls, Mo Salah is a great player but he needs to do greater things to be in the class of Ronaldo. Just one GOAT for Sallah and Liverpool and the street was turned upside down.

He needs to kill another GOAT called Messi to be a perpetual Salah celebrity. Ariwo ko ni music.

KUNLE AWOSIYAN is a journalist based in Lagos