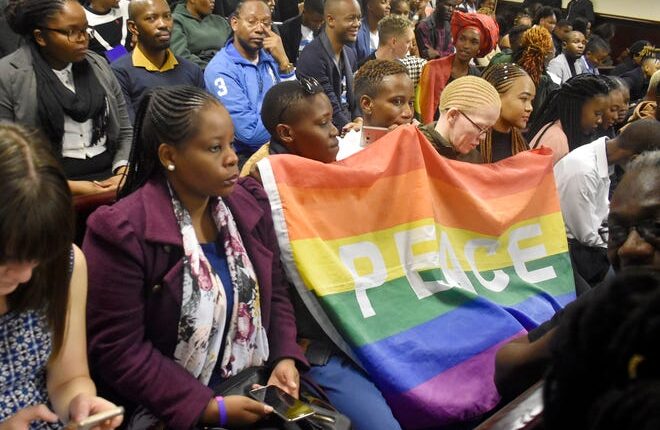 Botswana highest court has upheld a 2019 ruling that decriminalised gay sex, a decision hailed by gay community as establishing the southern African country as a “true democracy”.

Before the 2019 High Court ruling, which was praised by international organisations and activists, engaging in gay sex in Botswana was punishable by up to seven years in prison.

But the Botswana’s Court of Appeal on Monday decision in effect struck off two sections of the penal code that had outlawed homosexuality.

The state had argued on appeal that the penal code outlawed gay sex and there was no evidence that people’s attitude towards homosexuality had changed.

“Those sections have outlived their usefulness, and serve only to incentivise law enforcement agents to become key-hole peepers and intruders into the private space of citizens,” Kirby said.

Wearing rainbow-coloured masks, members of the gay community at the court reacted with loud cheers. Some wept for joy.

“This will forever change the landscape of democracy, human rights and equality in Botswana. Finally the state will have no business in what two consenting adults do in their privacy,” Sethunya Mosime, chairperson the Lesbians, Gays, and Bisexuals of Botswana (LEGABIBO), said outside the court.

“This case has tested Botswana democracy and independence of judiciary. We can strongly say Botswana is a true democracy.”

Botswana’s penal code, drawn up under British rule, outlaws “carnal knowledge of any person against the order of nature”. Those convicted face up to seven years in prison. It also outlaws “indecent practices between persons” in public or private, punishable with up to two years in prison.

Government officials were not immediately available to comment on the ruling, which cannot be further appealed as it was decided by the highest court.