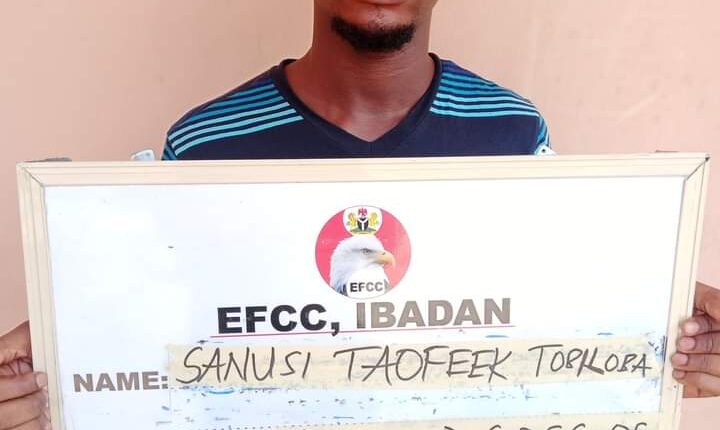 An Oyo State High Court sitting in Ibadan has sentenced a 25-year-old internet fraudster, Tobiloba Sanusi (a.k.a Gabriel Hamilton), to eight weeks of community service after finding him guilty of impersonation in the state.

The court further ruled that the convict forfeits to the Federal Government items recovered from him after his arrest by the Economic and Financial Crimes Commission (EFCC) Ibadan zonal office.

Some of the items found with the convict were one black iPhone XR, one black Samsung Galaxy S8, one blue Fero Phone F1100, one Silver Iphone, six Plus mobile phones, and one Silver Apple Laptop Macbook Air.

Through a statement made available by EFCC on Wednesday, the offence committed by Sanusi was contrary to Section 484 of the Criminal Code Cap, 38, Laws of Oyo State of Nigeria 2000.

While delivering judgement, the judge, while convicting Sanusi, who claimed to be a graduate of Entrepreneurship, held that the Commission successfully sustained the allegation of impersonating one Gabriel Hamilton to defraud people through the use of the internet.

Just In: No COVID-19 vaccine allocation for Nigeria before 2021