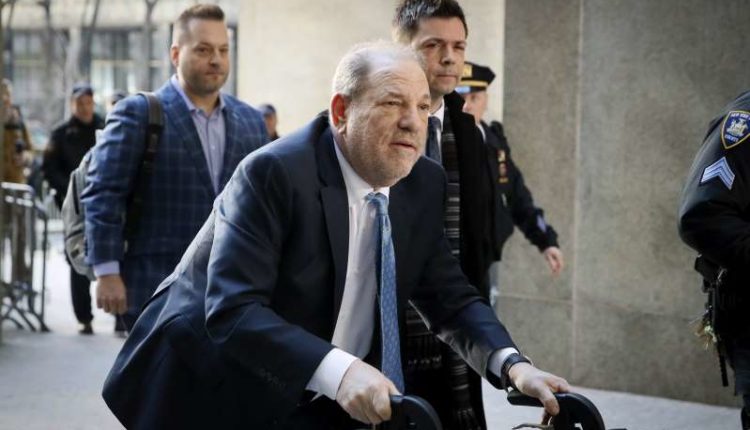 A court sitting in New York has ignored plea made by convicted film maker, Harvey Weinstein’s legal team, to give him a light sentence on compassionate grounds for which they cited old age and ill health, and has sentenced the 67 year old convicted sexual offender, to 23 years in prison.

It would be recalled that the disgraced Hollywood film maker had been convicted in February, 2020, after a much publicised legal battle which saw more than 100 Hollywood actresses come forward with rape allegations spanning over decades of his film career, and sparking world wide movement against rape and sexual misconduct, tagged #MeToo.

The case presiding Judge, Justice James Burke, who stated that Weinstein had shown no remorse for his misdeeds in course of the court proceedings and following his conviction on sexual assault of former production assistant, Mimi Haleyi, and rape of once-aspiring actress, Jessica Mann, handed down sentence of 23 years imprisonment for the former Hollywood film producer and also ordered him to register as a sex offender.

Speaking to pressmen in New York on Wednesday, the State Prosecutor, District Attorney Cyrus Vance, expressed satisfaction that justice had been served and stated that Weinstein’s sentence would serve as reminder for potential offenders that if a person who was as influential and powerful as Weinstein could be brought to justice, no offender would be let off scotsfree by the American legal system.

Vance, who described the sentence as a win for the victims, and victory for justice, explained that Weinstein’s unrepentant stance and statement were part of reason behind the 23 year sentence.

“The Judge sent a message today that this type of predatpry and criminal behavior is something that any potential offender is going to have to consider. The judge took it seriously, which is exactly how we think he should have. And we’re grateful for the outcome of the case”.

A source in the New York court proceeding alleged that the Hollywood bigshot had stayed aloof during victim testimonies and had shown no remorse during or after his conviction on the sexual misconduct charges which had been brought against him by his victims.

He said that Weinstein, who had come to court in a wheel chair following a recent heart surgery, had further shown his lack of remorse while making his last statements before sentencing, when he said that “I feel remorse for all of the men who are going through this fight”, and that Weinstein had told the court that he was worried about the “thousands of men” who were being victimized and denied due process as a result of the #MeToo movement which stemmed from his case.

However, Defense Attorney, Donna Rotuno, stated that she and her team were set to appeal Burke’s sentence, which she said was not in tandem with evidence presented in court and that judgement had been made based on sentiments rather than fact.

Rotunno expressed her anger at what she described as an “obnoxious sentence and a cowardly decision” and hinted that the viral #MeToo movement had colored the case against her client.

“How can we deny the fact that what happened before we walked in here had an impact? We will appeal, it is obvious that this case has been colored by many influences, several of which the Judge allowed to get into the court room”.

The Guild gathered that pending charges of forcible rape, forcible oral copulation, sexual penetration by use of force and sexual battery in a not totally unrelated case, in California, exist against Weinstein, for which, if he is sentenced, could get up to 28 years imprisonment, as well as three other sexual assault cases which are under investigation by the Los Angeles Police Department and Beverly Hills’ Police, which also mean that the embattled former movie producer could still face more charges in future.