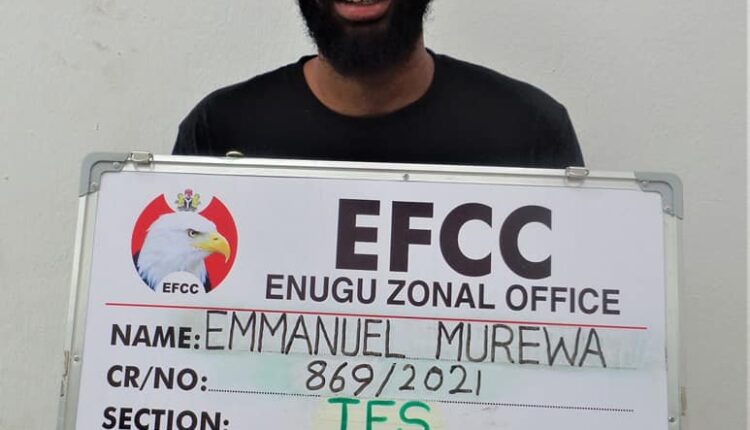 The Federal High Court in Enugu has sentenced 17 internet fraudsters arrested by the Economic and Financial Crimes Commission, (EFCC) to one year imprisonment for obtaining money through false pretense.

Offences brought to court against the convicts by the anti-graft agency were also bordering on criminal impersonation of foreigners in the country.

Delivering judgement on the case on Monday, Justice Mohammed Buba sentenced 15 of the offenders to one year imprisonment each with an option of N1 million fine.

Aside from that, the judge further ruled that the convicted impersonators would forfeit their mobile phones to the Federal Government.

Ohazuruike Christian was however sentenced to one year imprisonment with an option of N500, 000 fine and forfeit his mobile phone to the central Government.

According to the EFCC’s charge preferred against one of defendants. it read that one Echebiri Ifeanyichukwu, who was within the jurisdiction of the Federal High Court of Enugu, Nigeria had fraudulently impersonated one Marilyn Gutlervez from Los Angeles in the United States through his fake social media account.

The charges had showed that the impersonation was done with the intent to obtain money from unsuspecting foreign nationals by false pretence contrary to Section 22 (2)(b)(i)(ii)(iii) and punishable under Section 22(2)(b) of the Cybercrimes (Prohibition ,Prevention, Etc )Act 2015.

It would be recalled that the suspects were arraigned before court last Thursday on separate one count charges bordering on criminal impersonation and obtaining money by false pretences.