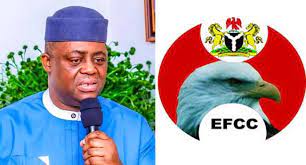 The Federal High Court sitting in Ikoyi, Lagos, has adjourned the continuation of trial of a former Minister of Aviation, Femi Fani-Kayode and others to January 24, 2022.

Fani-Kayode is said to be standing trial alongside a former Minister of State for Finance, Nenadi Usman, a former Chairman of the Association of Local Governments of Nigeria, ALGON, Yusuf Danjuma, and a company, Join-Trust Dimensions Nigeria Ltd. on a 17-count charge bordering money laundering to the tune of N4.6billion.

Delivering judgement on Tuesday by Justice Daniel Osaigor, the defendants were said to have pleaded “not guilty” to all the charges preferred against them.

As gathered, the counsel to the first defendant, Ferdinard Orbih, was absent at the sitting, following a letter notifying the Court in advance, other defence counsel, including Norrison Quakers, and Clement Onwuenwunor, were said to be present.

Also, at the last sitting on October 13, 2021, F.B. Ajudua had told the court that his client, Fani-Kayode, was on bed rest at Kubwa General Hospital, Abuja.

The prosecution counsel, Rotimi Oyedepo, was said not to have raised an objection to the letter sent in by the defence.

However, he was said to have told the Court that the prosecution’s investigation of the several letters that Fani-Kayode claimed to have obtained from Kubwa General Hospital and presented to court at previous sittings as an excuse for his absence showed that they were all fake.

He further stated that the EFCC was currently working on the report and will do the needful.