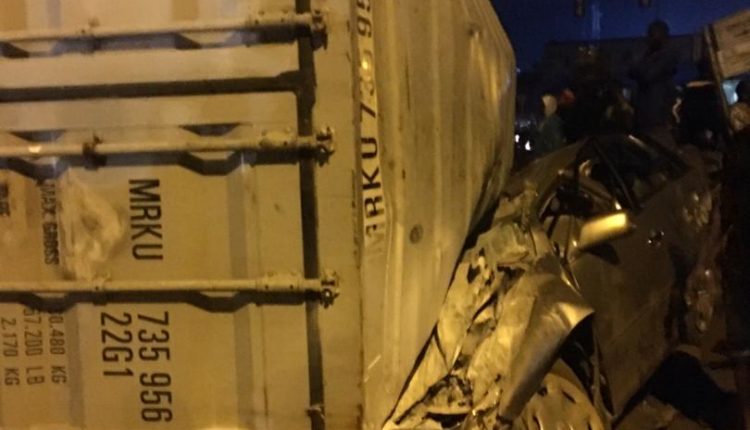 At least two persons have been confirmed dead and over five others sustained varying degrees of injuries when container truck fell off from a truck along Mile 12-Ikorodu Road, Lagos State.

The Guild gathered that the truck conveying the 40-feet container experienced brake failure at Agric Bus stop and the unlashed container fell from it and landed on a Toyota Corolla car.

It was learned that the truck driver, Aliu Abdullahi, had crushed some passengers and commercial motorcycle operators popularly called Okada but refused to wait after the accident.

An eyewitness told Guild that some Okada riders, who witnessed the scene, trailed him immediately, demanding that the driver parks and visit the accident scene.

While trying to avoid been caught, The Guild gathered that he crushed some vehicles including Rapid Respond Squad, RRS patrol vehicle, at Agric Bus stop and fell on another Ash-colour Toyota Corolla ash.

The Guild exclusively gathered that the truck driver had been arrested and detained at the Owotu Police Station for further interrogation.

Confirming the extent of damage on RRS vehicle, the Commander, Olatunji Disu, said that damaged the patrol vehicle where it was stationed for surveillance.

Also, Director General of the Lagos State Emergency Management Agency, LASEMA, Dr. Femi Oke-Osanyintolu, said: “We have deployed our men there. I cannot give you an accurate number of casualties. But presently, we are there to move the container and save lives.”