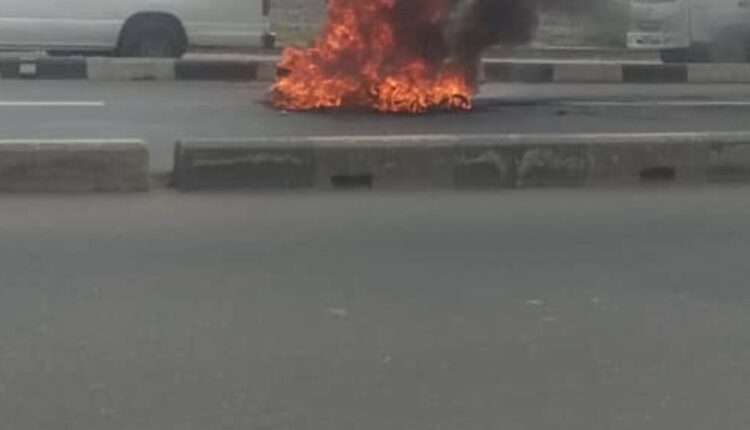 Share
Pandemonium has broke out on Lagos-Abeokuta expressway with commercial motorcycle operators popularly called Okada riders protesting against Nigerian Police arrest and impoundment of motorcycles on major roads across the state.
The protest, which resulted in attacking the state-owned Bus Rapid Transit (BRT) buses plying the road, was said to have started when officers of the Nigerian Police deployed to Lagos State Taskforce on environmental and special offences Unit stormed the busy road to impounded Okada found contravening the law.

It was learnt that scores of riders, who were armed with sticks and other weapons, chased the security operatives and vandalised public facilities that were within their reach during the protest on Wednesday.

Eyewitnesses said that the security personnel returned to their vehicles and left the scene after they were overpowered by the riders who were accompanied by hoodlums to ensure that the law enforcement officers do not carry out their duties.

The attack came barely 24 hours after the law enforcement agency personnel were attacked in Mile 2 and other parts of Amuwo-Odofin Local Government, injuring one Taskforce officer and vandalised two vehicles.

Taskforce Head, Public Affairs Unit, Adebayo Taofiq, yesterday, said that the personnel stormed the axis to restrict riders from driving against traffic, an act that contravenes the Lagos State law.

Adebayo added that aside from violating Lagos road traffic law, the riders also engage in robbery activities, dispossessing commuters of their valuables on Apapa-Oshodi expressway.

He noted that to protect Lagosians, the agency visited the axis to enforce the law, impounding atleast 72 Okadas from their operators for driving against the traffic on the road.

After the impoundment, the Taskforce spokesman, in a statement made available to The Guild, stated that the riders and hoodlums attacked the agency personnel and vandalised two Lagos taskforce vehicles including a truck.

Adebayo said: “Yes, the operatives of the Agency based of series of complaints from the public about activities of these Okada riders using their bikes to rob them of their valuables and plying restricted routes as well went out to the area for Enforcement.

“After impounding about 74 Okada caught plying one-way and those operating on highway, Okada riders mobilised themselves and attacked officers of the Agency