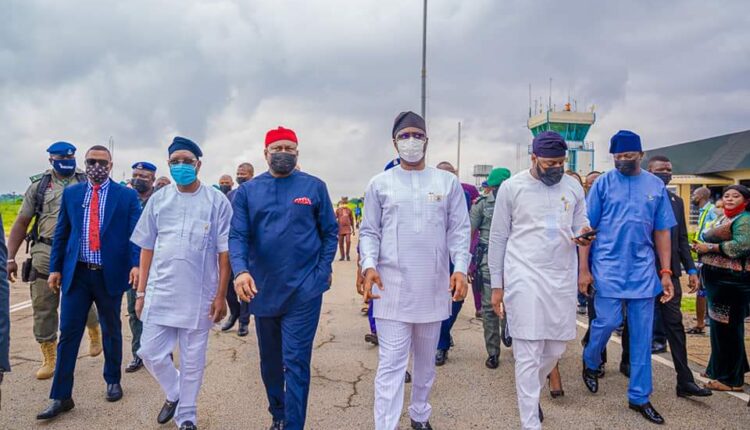 Oyo State Governor, Seyi Makinde, has commissioned the Protocol Lounge constructed by the state government at the Ibadan Airport, Alakia, and received the inaugural flight of Air Peace in Ibadan, with assurance that commercial flights operations would uplift the airport and boost the economy of the state.

The governor, while commissioning the new Protocol Lounge, which he described as fulfilment of a long-held dream, said that his administration has done a lot to upgrade the airport from category 5 to category 6, adding that his government would keep pushing until the airport gets to an international standard.

According to him, this day has finally come and it is exciting for us. We are opening the Lounge and also receiving the inaugural flight of Air Peace to Ibadan Airport and it is a fulfillment of a long-held dream.

While appreciating Overland for their services and keeping the Airport open, he said that the addition of Air Peace would ensure travellers have other options to choose from and eliminate the stress of travelling to Lagos by passengers who missed the Overland flight.

“So, we are excited today because part of what we said we are going to do as a government is to expand the economy of the state. Now, if you miss the Overland flight, you can always get on the Air Peace flight. And I am also certain that other airlines will start coming to this airport shortly,” he said.

Continuing he said, “I believe Air Peace airline also will be operating one flight in a day for now but I look forward to huge passenger traffic and a review of that frequency as soon as possible. I remember the first time I met with the Air Peace crew and I also spoke to the chairman about having a flight out of Ibadan. What I didn’t know at that time was the fact that you are bringing a brand-new aircraft to service Ibadan-Abuja route. So, I want to say thank you for that.

“Well, we did not just get here. We had to put some things in place. This lounge we are opening today is one of them. During the heat of the pandemic, this airport was downgraded. We did not have a fire tender and we had to put few other things in place. We got the upgrade back from category 5 to category 6. And we will keep pushing until we get an international flight out of this airport.”

The governor maintained that his administration has awarded the contract for an aviation fuel storage and dispensing facility to an indigenous company operating in Ibadan in order to make airlines stay overnight and take off as early as 7 a.m. to other places around the country.

“There are few things we are still doing and we have awarded the contract to have at this airport an aviation fuel storage and dispensing facility. People may ask why we are doing this. I have had discussion with some of the airlines and they will love to stay here overnight and take off as early as 7 a.m. to other places around the country but they are not able to do that because they cannot refuel in Ibadan.
“Within the next twelve months, this will become a thing of the past. We awarded the contract to an indigenous company operating in Ibadan. We are also fixing the road coming to the airport. The main road from Gate through Onipepeye up to here is at over 50 per cent completion.”

The governor equally explained that his administration would continue to provide the necessary support and collaboration to Air Peace and the Federal Airport Authority of Nigeria, FAAN.

He commended the governor for moving the state forward and doing everything possible to woo investors that would bring their resources to expand the economy of the state.

“Today is one of my happiest moments. This is like a homecoming for me. When I say homecoming, I mean it in every sense of that statement. Without Ibadanland, there may not have been an Allen Onyema – that may have been able to achieve certain things today.

Earlier, the Ibadan Airport Manager, Mrs. Tega Ayenuro, said Makinde has made a conspicuous difference in different facets of development of the Ibadan Airport, adding that he has spurred commitment and participation from all stakeholders as well as the management of FAAN.

She noted that the new Protocol Lounge would make the facilitation of VIPs and other government dignitaries seamless, ensuring orderliness and sanity in the area of facilitation within the airport.