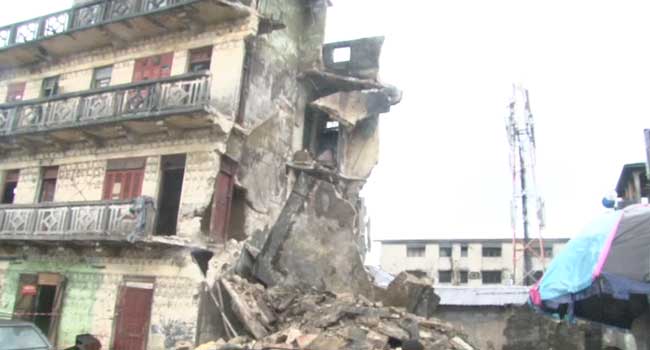 A three-storey building has been reported to have collapsed at the popular Bende street in old Port Harcourt township, Rivers State.

Meanwhile, it was learnt that no life was lost just as there were no occupants in the building before it came down, causing panic among residents in the state.

The building, which was said to have been constructed several decades ago by the colonial masters, caved in at about 2.00 am on Wednesday.

A resident of the area, Alex Loveday, said this is not the first time the building would collapse and that when it previously collapsed partially, occupants were warned to keep away from the facility but they ignored it.

Loveday, however, faulted the state government for not ensuring compliance by taking over the building and demolishing it, so as not to endanger human lives.

“Government has not fully taken charge of it, that is why they still remain here. They don’t want to go out because nobody asked them to go out with a force and they look like they are not paying any bills. But they don’t know that they are endangering their lives.

This collapsed three-storey building on 112 Bende Street is one amongst many in this axis of Port Harcourt, the Rivers State capital which is a source of concern to residents.

Many of these structures erected during the colonial period have outlived their lifespan but are still being used as residential buildings and shops.

When contacted Rivers State Police Command Public Relations Officer, Iringe Grace Koko, said there was no occupant in the building before it collapsed.