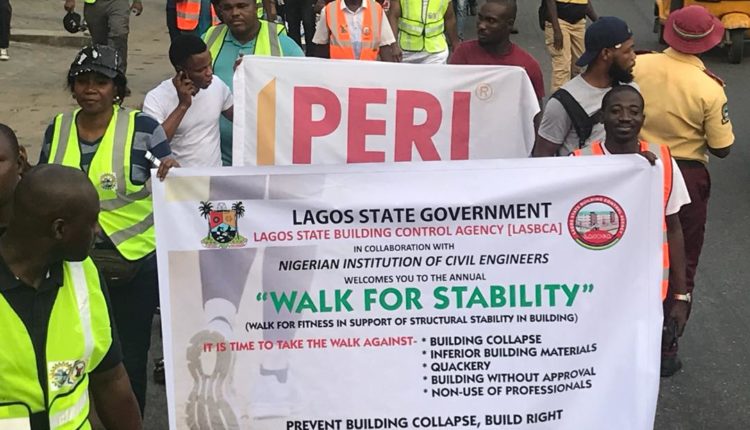 Hours after the Lagos State Government pulled down a distressed building on Lagos Island to avert loss of lives and property, it agency, Lagos State Building Control Agency (LASBCA) and others have stormed the streets, enlightening residents on the solution to prevent collapse building in the state.

Others that joined LASBCA to different locations on Saturday were Lagos State Materials Testing Laboratory (LSMTL), and Lagos Safety Commission (LSSC) and Lagos State Chapter of the Nigerian Institution of Civil Engineers (NICE).

During the walk themed ‘Walk for Safety,’ that started from the Lagos State Fire Service, Alausa Ikeja through Opebi Link Bridge, Allen Avenue, Obafemi-Awolowo Way, Ikeja among other areas within the axis was held to draw attention to the need to ensure structural stability in buildings in order to avoid needless loss of lives and property.

General Manager of LASBCA, Engr. Abiola Kosegbe, who addressed newsmen after the walk, disclosed that the solution discovered by the agency was that most of the incidences of building collapse witnessed in recent times across the State were a result of lack of professional supervision.

“LASBCA enjoins you to employ the services of professionals, use quality building materials, ensure contractors have general contractor insurance, insist on certification of every stage of construction by professionals and maintain adequate setbacks and airspaces among others,” the General Manager stated.

To get the discovery to residents, Kosegbe explained that this necessitated the involvement of all stakeholders in the exercise to cascade the message down to members of the public, property developers and all other professionals involved in the building industry.

She stressed that the need for builders and other stakeholders to obtain necessary approvals before embarking on construction works.

The Director-General of LSSC, Lanre Mojola, described the coming together of the various government agencies with the Lagos State Chapter of NICE as a boost for the campaign for a safer Lagos.

He said that the agency is exploring all avenues to ensure the realization of the mandate of the safety of lives and property given to the Commission by Mr. Governor, Babajide Olusola Sanwo-Olu.

Also speaking during the exercise, the General Manager of Lagos State Materials Testing Laboratory, Engr. Lekan Ajani, expressed the belief that there is a better result in working together with relevant stakeholders in the built sector.

He opined that ensuring the integrity of a building should not be limited to procuring standard and quality building materials alone but should also incorporate proper supervision and monitoring by certified professionals to ensure that buildings are built according to approvals.

The National Vice Chairman of NICE, Tokunbo Ajanaku, while decrying involvement of quacks in the built industry, stated that members of the society must insist on patronizing certified professionals if the incidences of building collapsed must be addressed.

He said the various professionals in the built sector had realized the need to work together as a team because the lapses of any of the professionals in the chain of construction works can affect the overall objective of having a standard structure that can stand the test of time.