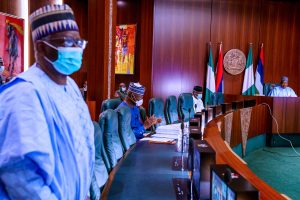 The Conference of Nigeria Political Parties (CNPP) has demanded a level playing ground for the newly appointed Chief of Staff to the President, Professor Ibrahim Gambari, to carry out his duties to President Muhammadu Buhari, and the nation at large.

It said for the new Chief of Staff to be effective, it is imperative that Gambari is accorded the same privileges extended to his predecessor, late Mallam Abba Kyari, whose towering figure was felt in the country despite working behind the scene and with no constitutional recognition for his office.

CNPP Secretary-General, Willy Ezugwu, while hailing the appointment of the Ilorin Emirate born diplomat, said the new Chief of Staff could reinvent governance in the country if given a free hand to draw from his wealth of experience for the betterment of Nigeria and Nigerians.

Ezugwu, through a statement released to newsmen on Thursday, said the country would be better for it if Gambari is allowed to inject his outstanding contributions, administrative experience, scholarship and excellence into the President Muhammadu Buhari-led government towards ensuring good governance, democratic dividends as well as shared prosperity in the nation.

“No doubt that Professor Ibrahim Gambari came into the government with an unequaled wealth of experience that is capable of stabilizing the President Muhammadu Buhari administration.

“However, our worst fears are that he may not be accorded the same privileges extended to his predecessor, late Mallam Abba Kyari whom Mr. President openly ordered all his cabinet Ministers to report to. The new Chief of Staff is a well-known intellectual member of not only the diplomatic corps but also of the academia and the civil society.

“Professor Gambari’s robust contacts cuts across all divides and the perception of his person across the country will be a big plus for the federal government if he is given a free hand to operate independently of the much talked about Aso Rock cabal, which is more of an ideology of the President than personalities.

“If those around Mr. President can allow him to perform and run his office for the benefit of the Nigerian people. We have confidence in the ability of the Chief of State to deliver as a solution provider, expert in conflict prevention, management, and resolution as well as sustainable development”, the CNPP stated.