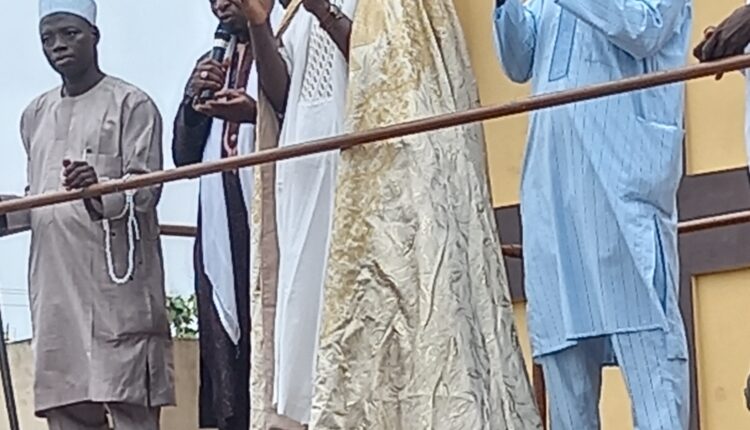 The Chief Imam of Oluwole Ogba Central Mosque in Ikeja area of Lagos State, Sa’adullah Bello, has urged Nigerians across the country not to loose hope with myriads of challenges bedevilling the country, saying with patience and perseverance things would change for the better.

He added that though the challenges were unnerving and had rendered many hopeless, particularly those who have lost loved ones and means of livelihood to the insecurity crisis, there was still light at the end of the tunnel provided the citizens can turn back to the supreme being and submit to his will.

Total submission, the cleric said, was needed by all individuals, including political leaders at all government tiers in the country as part of measures to chart a way forward toward in combating the challenges and restoring peace in war-torn regions across Nigeria such that would guarantee the nation was placed on path of accelerated growth.

In his sermon after leading the obligatory Eid-el-Kabir prayer on Tuesday, Bello noted that while Nigerians have been seeing the country’s current reality from worldly perspectives, recent trajectories have justified the promised happening during the end of days as predicted in the Holy books.

He said that while the citizens might resort to lamenting and blaming elected leaders, everyone must come together and live in fairness and justice irrespective of ethnic, religious and political affiliations as prescribed by the Holy books.

“The recent happening in our personal lives and the country at large has been of concern to those who reflect. The issues of insecurity, economic and health challenges bedevilling the entire world in guise of COVID-19 which has affected trade and global economies and Nigeria is not an exception.

“But we have been promised that when affliction of this magnitude arise, the only antidote for it was total submission to the will of Allah and to be hopeful of better tomorrow,” he said.

Continuing, he said, “our engagement must be based on fairness and fear of God. Our patience must be top-notch when adversity come upon like we have been witnessing lately. There is time and season, but everything deserves patience and with patience comes ease.”

Explaining the essence of the festival, he noted that aside from total submission to Almighty’s will which was displayed by Prophet Ibrahim (AS) in sacrificing his only son, Prophet Ishmael, which was replaced with a ram, muslims across the country must sit back and reflect on their relationship with the creator.

The cleric urged the believers to exploit the season in renewing their relationship with Allah and strive to achieve his forgiveness as that was the essence of the festivity. “Forgive your neighbours, share happiness and enjoined good deeds. Those who achieve this are those who really celebrate,” he said.