JUST IN: IGP redeploys Imo, Zamfara, four other CPs amid… 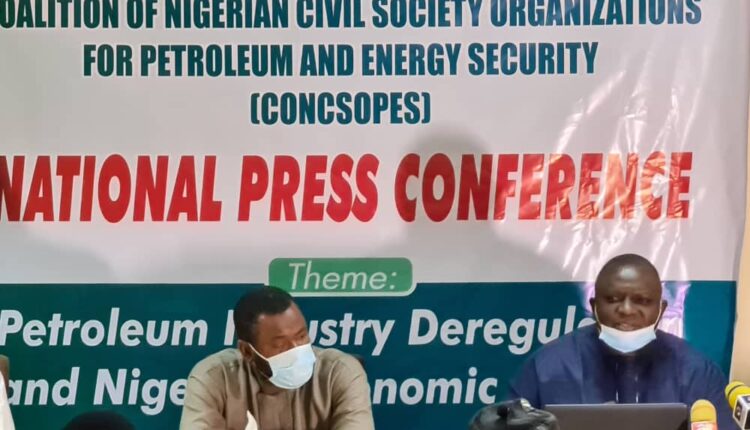 A Coalition of Nigerian Civil Society Organizations for Petroleum and Energy Security (CONCSOPES) has asked the Federal Government to disregard suggestions that deregulation of Premium Motor Spirit (PMS) price be suspended and argued that the current price system has ended the challenges often confronted by Nigerians on the product.

The group added that the apex government should consider benefits of the policy including ending scarcity of the products that often resulted in long queues seen at petrol stations across the country and that a reversal of deregulation would return Nigeria backward.

At the joint press conference in Abuja, the group further argued that if the government reverse its earlier decision on deregulation, its purse particularly that of Nigerian National Petroleum Corporation (NNPC) could experience negative financial records.

The agitation from the Nigerian Labour Congress (NLC) and other unions against the deregulation came barely a year after the Federal Government announced the policy to address challenges on product availability and others.

Addressing journalists, the CONCSOPES convener, Timothy Ademola, on Saturday at the event, noted that rather than agitating for reversal, the labour unions should partner NNPC and ensure the country have a people-centred deregulation policy.

Ademola, while educating NLC and other agitators on the implication of their demands, stated that if the policy is reversed, NNPC would inadvertently be compelled to absorb cost of the price differential between landing cost and pump price, saying, this will put NNPC in a very bad spot financially and eventually lead to a situation that it would be difficult to import products.

He said: “The market stabilization that has been brought about by the past one year of deregulation is a strong assurance that full deregulation is the way to go if Nigerians are to enjoy the full benefits of their hydrocarbon wealth. Resisting deregulation may only slow down our national progress in this regard.

“Truly, the situation calls for a new and bold approach. We suggest that Labour should not just constitute downright opposition to deregulation but partner with Government on how best to achieve patriotic, people-centred Deregulation; leveraging the new Government policy for the soon resumption of Nigerian Refineries, the approval of Modular Refineries and the welcome development of Dangote Mega Refinery”.

As the discussion on why the government did not wait for the operationalization of the refineries before effecting deregulation, a member of the Coalition, Henry Adigun, waded in and explained that the influx of private refineries including Dangote, would not change the petrol price since crude oil was sold at an international market rate and not the country’s currency.

Arguing that there was never a time that customers would accept as right for the policy implementation, Adigun appealed that Nigerians should endure the temporary policy change in the downstream sector.

He added that the policy embarked upon by the federal government was made to protect the country and that there would be a downward flow of price in the long run.

Meanwhile, Ademola further cut-in and explained that the deregulation was designed to give all stakeholders approval to source their products from anywhere and sell at price dictated by market forces, noting, this would lead to downward price adjustment.

“But the scarcity of foreign exchange has made it difficult for the marketers to import products, thereby making NNPC the sole importer in keeping with its statutory role as the marketer of last resort”.

The convener insisted that: “It will do our nation much good if our respected labour leaders spearheading the resistance to deregulation would recognize that deregulation has largely stabilized petroleum products supply over this past year.

“Once the foreign exchange issue that has made it difficult for major and independent marketers to engage in importation of petroleum products is resolved, the other gains of deregulation will kick in and Nigerians will be better for it.

Earlier, he recalled that last week, the price of crude oil in the international market rallied to $65 per barrel, the highest in thirteen months. This was after oil price sank to a sub-zero level in the wake of the Covid-19 pandemic in 2020.

“Ordinarily, for a country like ours that is heavily dependent on revenues from oil, the price rally should be good news as it portends more money for the government to provide social amenities for the welfare of the citizens. But this good news of crude oil price rally is dampened by the prospect of a rise in the pump price of PMS.

“During the launch of the Nigerian Upstream Cost Optimization Programme (NUCOP) recently, both the Minister of State for Petroleum Resources, Timipre Sylva, and the Group Managing Director of NNPC, Mele Kyari, hinted at the prospect of a rise in the pump price of petrol in the country in line with the deregulation regime in operation in the downstream, following the rise in the price of crude oil.

“Since then, the leadership of organized labour have been vigorously contending that a pump price increase would impose more hardship on Nigerians who are already battling the effect of a sluggish economy.

“In Nigeria, the deregulation of petroleum downstream and pump price increase have been very difficult issues that have generated a lot of conflict between the Government and Labour for close to two decades.

“The old system where crude oil earmarked for local refining/consumption was sold to the NNPC at a subsidized rate was able to take care of price differential between landing cost and regulated pump price. With the new policy, a system of subsidy payment was introduced to take care of the price differential. But over time, the subsidy system became cumbersome and Government began to find it unsustainable.

” The various attempts to end the subsidy regime by deregulating the downstream became a constant subject of bitter conflicts between the government and labour sometimes resulting in debilitating strikes that crippled the national economy.

“The Sylva and the Petroleum Products Pricing Regulatory Agency (PPPRA) had stated repeatedly that the price of PMS would be determined by prevailing market force. One of those forces is the price of crude oil.

“With the current rise in the price of crude oil, it is inevitable that the price of petrol would go up in the local market. More so when there is no provision in the 2021 Appropriation Act for subsidy payment”.