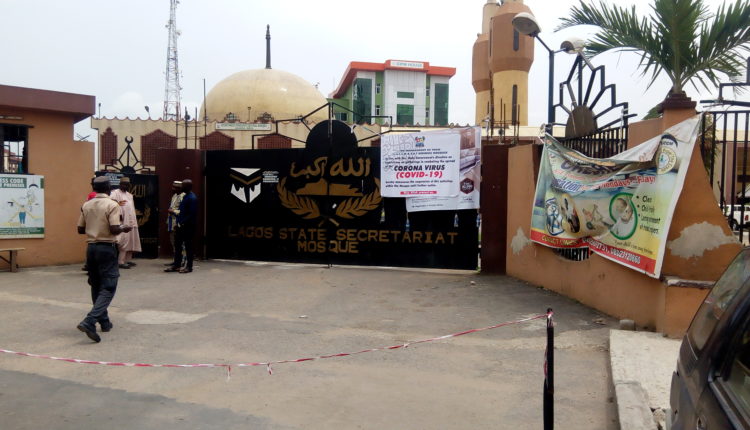 Lagos Churches and Mosques have disregarded the State Government ban on holding religious gatherings aim to curb further spread of the novel coronavirus pandemic in the state.

The Lagos State Government had recently ordered the ban of all religious services consisting of about 50 persons from holding in the state, and explained that its move was as a result of newly recorded cases of coronavirus in the state, one of which was a patient who had no history of travel outside the country and had contracted the deadly disease within the state.

According to government, the ban on religious meetings was a strategy to mitigate possible spread of the viral infection and keep Lagosians safe while the government engages in activities that could to successfully overcome coronavirus threats in the state.

Religious bodies in the state, however, conducted services in their various places of worship as teeming congregants flocked to such centers where the churches held special services, prayer meetings, and open-air revivals, and the mosques held the Friday Jummat prayers in disregard of the government directive.

The Guild gathered that though some religious organisations encouraged personal hygiene methods through provision of hand sanitizers and handwashing stations at their meeting sites, several others had carried out regular activities and made no efforts to help prevent a possible spread of the social disease amongst their worshippers.

For most mosques who held the Friday prayers despite government ban against such, the service and prayers were held in keeping with Islamic traditions with the only deviation being a shut down of all public address systems which afforded for a less publicised jummah prayer service than was the norm.

The Guild gathered that some mosques and churches, however, complied with the state ban on religious gatherings due to the covid-19 threat facing Nigeria, stopping all physical meetings amongst their congregation and commuting major services to be held online.

The Guild observed that the Alausa Secretariat Central Mosque, in compliance with the state government directives, on Friday shut its doors to the public and canceled Jummat prayers from holding in its premises.

The usually busy mosque grounds were empty, as they were barred from entry to all persons except the mosque’s staff who were mandated to wear protective face coverings and use hand sanitizers provided at the main entrance.

Muslim faithfuls were turned back at the gate, as information slowly got out that the central mosque was on lockdown in obedience to government directives and also as a preventive measure against further spread of the deadly coronavirus pandemic in the country.

The restriction of activities also affected the Friday market traders who would have displayed their wares on the walkways surrounding the mosque premises and which usually gather a large crowd of shoppers in patronage of the displayed items, but were also barred from making sales by the religious organisation.

It gathered that the traders had been informed by the Mosque leadership that they were to fully comply with the government directive, and that trade along the mosque corridor was henceforth prohibited till the ban on such activities, which could draw crowd attention, had been lifted and the threat of coronavirus neutralized.

One of the traders who spoke to the Guild expressed her dissatisfaction over the move to restrict their weekly sales, saying that many of the traders relied solely on the income generated every week after having aired their wares, and that stopping them from carrying out their regular trading activities would severely affect them financially.

“We don’t have choice but this is where we eat, the sales we make here is what holds us. But we understand that it is because of the situation of things right now. Though I don’t think our making sales will disturb the Government directive that services should not hold. We can make our own sales and not affect the mosque”.