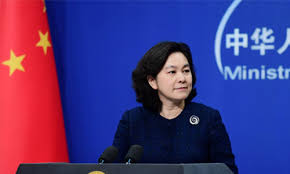 The Chinese Government has refuted allegations that the deadly coronavirus pandemic started out as a laboratory experiment in Wuhan region of the country, saying that all such claims are false and unfounded.

It also denied recent claims made by the American Secretary of State, Mike Pompeo, who had alleged that the United States of America had damning proof of China’s culpability in the accidental release of the viral pandemic from its laboratory center.

The  Spokesperson of the nation’s Foreign Ministry, Hua Chunying, faulted Pompeo’s claim, saying that no such accidental release could have occurred as the disease had not been engineered in any laboratory within Chinese borders.

Chunying, while speaking to pressmen on Wednesday, recalled that agencies such as the World Health Organisation (WHO) had carried out investigations which determined that the viral infection had been contracted from animals and that no evidence of deliberate scientific manipulation had been recorded.

She decried the American’s claims otherwise and said the determination of coronavirus origins should be left to scientists and health organizations who were in the best position to carry out investigations and come up with fact-based results.

“I think this matter should be handed to scientists and medical professionals, and not politicians… Mr. Pompeo repeatedly spoke up but he cannot present any evidence. How can he? Because he doesn’t have any”, she said.