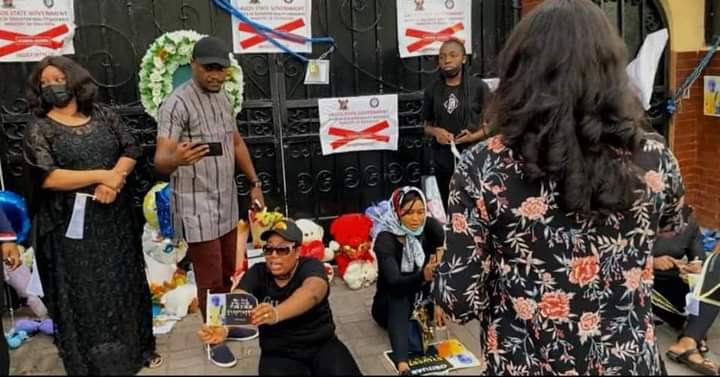 Dozens of women including celebrities have stormed the premises of Dowen College in Lekki axis of Lagos State to protests over the death of a 12-year-old Sylvester Oromoni Jnr, just as they demanded that the government revoke the license issued to the school management immediately.

The protesters, who were all dressed in black T-shirt and other attires to indicate they commiserate with the family of the deceased student, also gave the Lagos State Government and the Nigerian Police seven days to unravel the killers of Sylvester Oromoni Jnr.

They added that at the expiration of the ultimatum, Wednesday December 15th, another rounds of protests would commence and that they would be laying siege at the entrance of the school until the government identify everyone responsible for the student’s death.

Some of the celebrities that stormed the school premises on Wednesday to demonstrate and demand justice were Damilola Adekoya popularly called Princess, another musician and actor, identified as Adetoun, and others.

Addressing newsmen on behalf of others during the protest, Adetoun, stated that the law enforcement agency should keep the ongoing investigation open and probe other bullying cases that were reported by parents of the school.

According to her, the Nigerian Police should investigate all cases of maltreatment that were reported earlier by students in the school.

“Aside from that, the First lady of Lagos State and the governor, Babajide Sanwo-Olu, should pay a condolence visit to the Oromoni family in Warri, Delta State.

“It is sad that the government that sworn in to defend life and property within the state has failed to provide it’s core responsibility to the people.

“As a way to solve killing in the country particularly Lagos, we demanded that public and private schools should be monitored to ensure the students get adequate protection while in school”, she added.