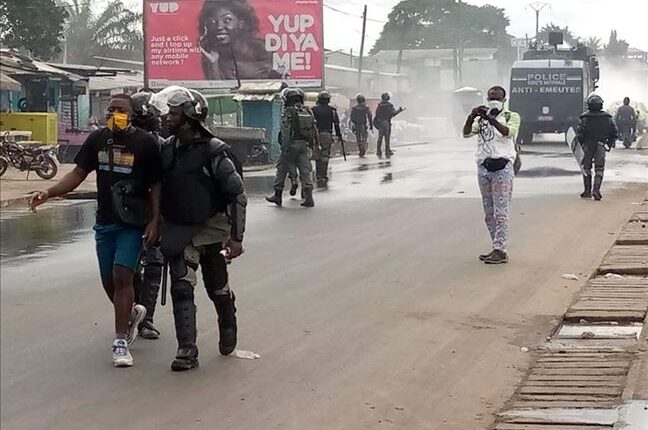 Hundreds of Cameroonians protesting against President Paul Biya administration’s policies and programmes were dispersed and arrested by policemen and gendarmes in the commercial hub of Douala.

As gathered, the busy Ndokoti commercial district of Douala and chanted several anti-government slogans particularly ‘Biya must go’, to express their displeasure over continued stay of the president in office.

The rally for an end to Biya’s near 40-year rule was said to have been called by the president’s closest rival, Maurice Kamto, of the Cameroon Renaissance Movement party, who hopes to spark a popular revolt as experienced in other African nations including Mali.

Before the protest on Tuesday, the security forces were said to have stormed different locations on the streets of Cameroon’s largest cities, including the capital, Yaounde, after information filtered in that Kamto was allegedly inciting the public against the government.

In anticipation of the demonstrations, after raising concern among residents of a return to the kind of violent crackdowns on protests in recent years, the law enforcement officers had camped out in trucks at major intersections to scare protesters from embarking on the move.

When the protests started, The Guild gathered that the law enforcement officers chased some of the protesters across the neighbourhood and into their houses to ensure they were arrested.

Among those arrested over the protest was Kamto’s spokesman, Olivier Bibou, who was said to have been arrested at his home after the protesters were dispersed during the demonstration.

Confirming his arrest, Bibou’s wife, Jeanne, who said that her husband was picked for allegedly organising a rebellious and hostile activities in the country, among others.

Earlier, the country had descended into chaos in recent years even after Biya declared war against Islamist insurgents in its far north and separatist rebels in the west.

Biya was also said to be under pressure from young political activists in urban centres who desired change and argued that the 87-year-old president has stolen elections and is the mastermind of a series of deadly backlashes against those who oppose him.

Although, the government denied those charges after winning another term during the 2018 presidential election that was described by Kamto as fraudulent.

Kamto was jailed for nine months in 2019 on insurrection charges following a protest. He was later pardoned, but his arrest galvanised the opposition and has led to sporadic protests ever since.