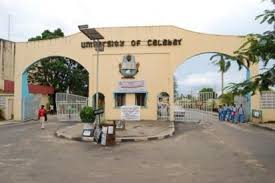 The management of University of Calabar (UNICAL) has indicted dozens of lecturers in the new report conducted to determine perpetrators of examination malpractices within the institution.

UNICAL said that the lecturers were responsible for the surge in cases of malpractices, saying lecturers have resorted to giving students scripts to write exams at homes, hotels and relaxation places across the state.

According to the management, the investigation conducted within the four walls of UNICAL proved that several acts of sorting, extortions and sexual harassments were currently ongoing in the institution.

The indictment was contained in a memorandum obtained by The Guild on Thursday and signed by the Deputy Vice-Chancellor, Administration, Prof. Michael Okom, for the institution.

In the memo dated Tuesday, August 10, 2021, the managament, while lamenting over the discovery, described the lecturers actions before, during and after examinations as obnoxious and abhorrable.

The management hinted that the lecturers caught in the act have been identified and would be probe soon to serve as a deterrent to others still engaging in the act and others planning to join the bandwagon. 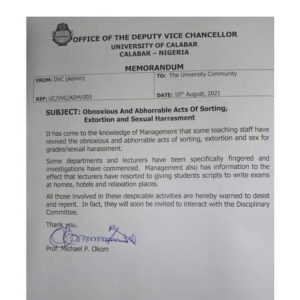 “It has come to the knowledge of Management that some teaching staff have revived the obnoxious and abhorrable acts of sorting, extortion and sex for grades/sexual harassment,” the memorandum read.

“Some departments and lecturers have been specifically fingered and investigations have commenced. Management also has information to the effect that lecturers have resorted to giving students scripts to write exams at homes, hotels and relaxation places.

“All those involved in these despicable activities are hereby warned to desist and repent. In fact, they will soon be invited to interact with the Disciplinary Committee.”