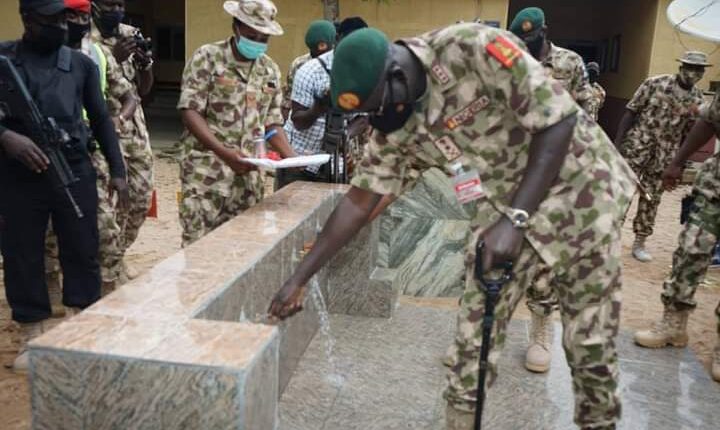 The Chief of Army Staff, , Lt Gen Tukur Buratai, has reiterated that his office would continue to do its best to ensure military men start getting considerable welfare as well as other adequate means of livelyhood such that would assist in motivating personel.

Buratrai said that his committed towards a better welfarism of military men became neccessary to have better security aparatus in the country, such that can stand against threats and give the force needed boost.

Speaking during commissionong of water project yesterday in Borno, army boss promised that he would ensure that personnel get improved standard of living as well as their families across Army Barracks in Nigeria, adding that, improving welfare of personnel remained his utmost concern.

The general  said that there would be provision befitting living accommodation for officers and soldiers, particulalrly those in Borno state,  and other army personnel in service to encourage and improve the standard of living, to enable soldiers discharge their duties honorably.

Buratai maintained that his office would do its best in improving accomodatio accros baracks and that it would see to other needed areas that can be of motivatval morale to military men.

“We will try to see how we can improve on your barrack accommodation, but it seems there is still much work to be done. We will still build more.I want to thank the commanding officers for their resourcefulness towards solving the perennial water problems in this cantonment.

“This initiative is highly commended because it is one of the cardinal principles in my vision which is -“To have a professionally responsive Nigerian Army in the discharge of its constitutional roles”.

“The commanding officers have shown the responsiveness in the provision of water to meet the need of the soldiers and their families to have portable water for their consumption and domestic use.

While commending troops over efforts in stabilising security across communities, the army boss  charged commanding officers to be judicious in use of  resources at their disposal and that  they must continue to ensure that there were no security threats in the area.

“As such, I want you to remain steadfast, loyal and committed to the country, and obey your superiors and surely we will move Nigerian Army forward and achieve our mandate of defending our country from any external aggression as well as safeguarding its territorial integrity,” he said.