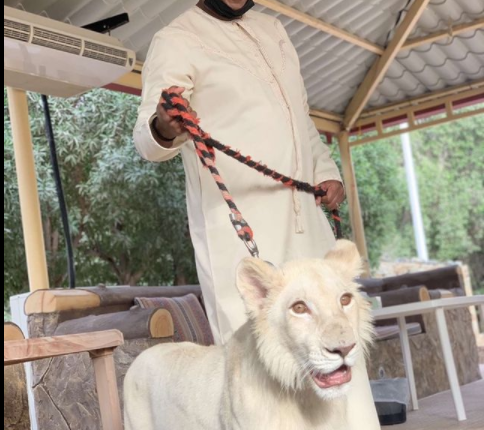 President Muhammadu Buhari’s son-in-law, Ahmed Indimi, has acquired a lion as a pet, just as he appealed to Nigerians to protect wildlife animals from been killed or captured.

Indimi, the son of an oil magnate, Mohammed Indimi, who married Zahra, said that the lion was his new addition to the pets at his disposal.

He announced the new addition on Sunday through a short statement on his official social media handle and was seen in a picture holding the white lion.

Indimi, who took pictures with the lion, captioned both posts differently: “My new pet” and on another picture with the same pet, saying, “Love the new pet”.

It would be recalled that the son of the oil tycoon walked down the aisle with Zahra in a Muslim wedding (Nikkah) that attracted dignitaries from all walks of life in 2016.